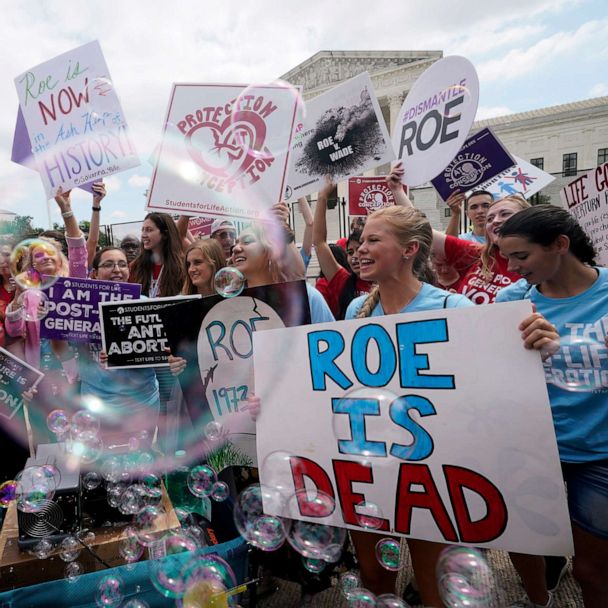 The abortion landscape of the United States has changed dramatically since Roe v. Wade was overturned by the Supreme Court six months ago.

The decision to reverse Roe, which guaranteed a constitutional right to abortion care, means states now choose how much access residents have to abortion.

Some states either had so-called trigger laws go into effect or laws that pre-dated Roe that were enforced following the court’s decision.

Meanwhile, some other states enacted laws that strengthened abortion rights or rejected ballot initiatives that would have further restricted access to the procedure. And then there were states did neither. 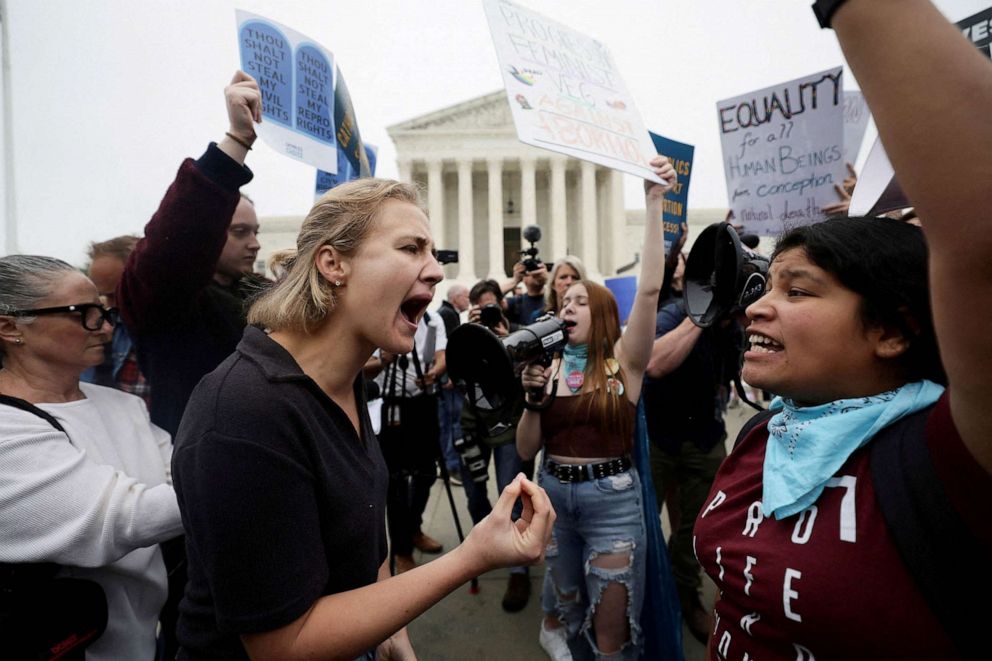 Pro-abortion and anti-abortion demonstrators protest outside the U.S. Supreme Court after the leak of a draft majority opinion written by Justice Samuel Alito preparing for a majority of the court to overturn the landmark Roe v. Wade abortion rights decision later this year, in Washington, May 3, 2022.

Since Roe was overturned, at least 14 states have nearly ceased all abortion services.

Additionally, in Wisconsin, abortion services have stopped “due to legal uncertainty around the status of the state’s pre-Roe ban,” the Guttmacher Institute states. 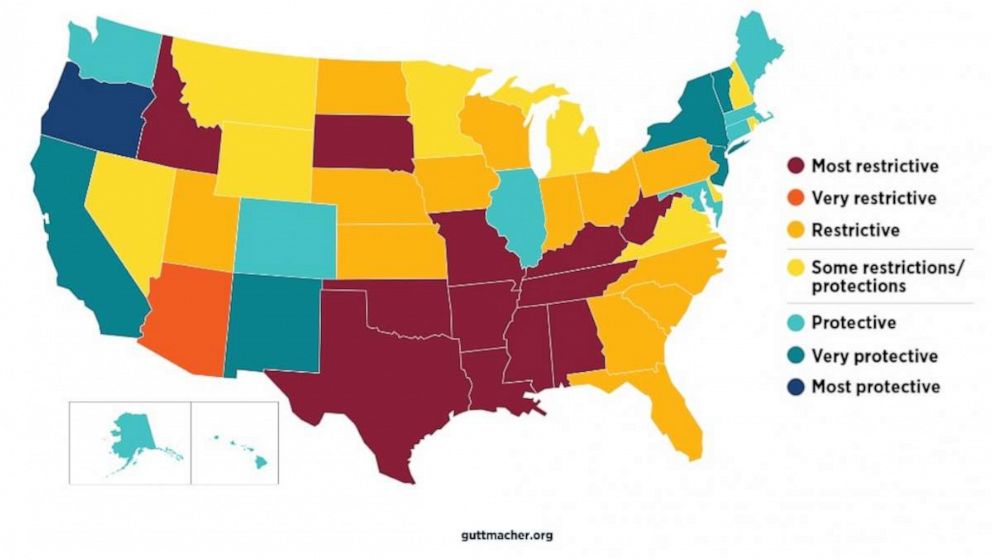 A map by Guttmacher Institute shows state abortion policies in effect as of Dec. 12, 2022.

Wisconsin has a 20-week ban but also a pre-Roe abortion ban on the books that could go into effect now that Roe has been overturned. Georgia also has a six-week ban in place.

Meanwhile, in Indiana, North Dakota, Ohio, Utah and Wyoming, abortion bans were passed, but are currently being blocked while legal action proceeds.

Over a dozen states work to protect abortion access

States including California, Massachusetts, New Jersey, New Mexico, New York and Oregon committed over $250 million collectively to abortion funding over the past year, according to Guttmacher.

According to Guttmacher, 14 states adopted so-called shield laws designed to shield people who travel across states lines to receive an abortion and the providers who care for those patients. This means they can’t be charged for receiving an abortion out-of-state.

Voters go to the polls to vote on abortion access

The fall of Roe v. Wade raised the stakes for the 2022 midterm election in November, as multiple states had abortion-related questions on the ballot.

The vote came after the state’s Supreme Court decided in 2019 that the Kansas constitution establishes a fundamental right to abortion. 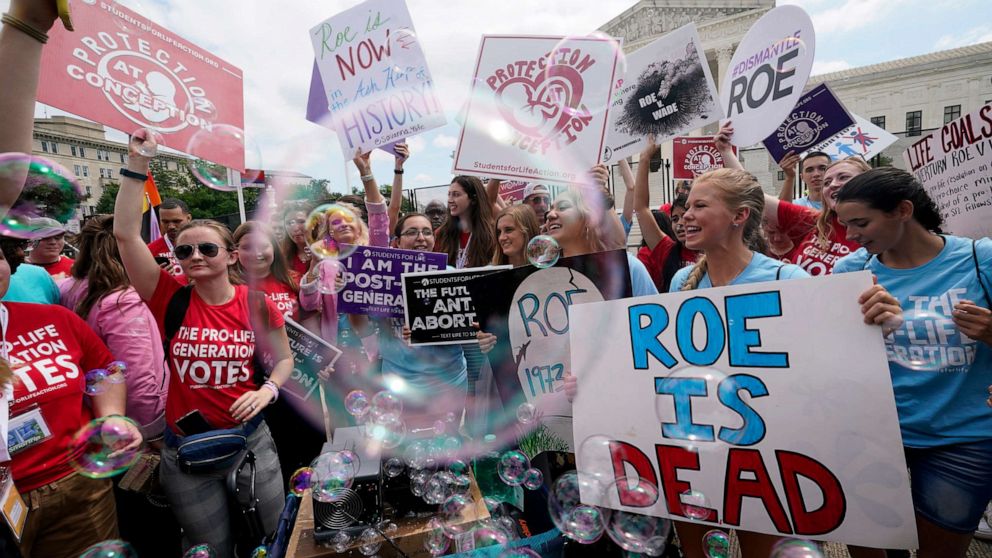 The Kansas vote was the first state-level test after the Supreme Court voted to overturn Roe v. Wade.

In California, voters decided to amend the state constitution to prohibit the state from denying or interfering with a person’s “reproductive freedom.” Voters also accepted lawmakers’ proposal to protect the fundamental right to choose to get an abortion or use contraceptives.

Currently, abortion is legal up until viability in California, which is about 24 to 26 weeks gestation, according to the Guttmacher Institute.

Michigan voters meanwhile approved a constitutional amendment that would add protections for reproductive rights. The amendment defines reproductive freedom as “the right to make and effectuate decisions about all matters relating to pregnancy, including but not limited to prenatal care, childbirth, postpartum care, contraception, sterilization, abortion care, miscarriage management and infertility care.”

A state abortion ban on the books in Michigan since 1931 is being challenged in state courts, but a state judge ruled in September that the ban is unconstitutional, barring its enforcement by the state’s attorney general and state prosecutors.

In Kentucky, voters rejected an amendment to the state’s constitution that specified the right to abortion does not exist, nor is the government required to allocate funding for abortion.

Abortion is currently banned in the state after a trigger law went into effect when Roe was overturned. Arguments against the ban will soon be heard in the Kentucky Supreme Court, something the amendment would have prevented.

Montana voters rejected a proposal to change the state constitution to define all fetuses “born alive” as legal persons, including those born after an attempted abortion. The proposal would have granted any fetus born alive the right to appropriate and reasonable medical care and treatment.

Dr. Beverly Gray, an obstetrician and gynecologist at Duke Health in Durham, North Carolina, told ABC News that ever since Roe was overturned, there has been an increase in patients, both locally and from out-of-state.

“With Florida having a 15-week ban, Georgia and Tennessee having fairly strict bans, and then South Carolina kind of going back and forth with bans, patients ended up coming to North Carolina for care,” she said. “We’re seeing a handful of patients almost every day in clinic that are traveling for care.”

“I think it’s really scary for patients who might find themselves in a situation that they weren’t expecting and needing care and their providers may not be able to provide evidence-based care because of laws that are now in place,” she continued. 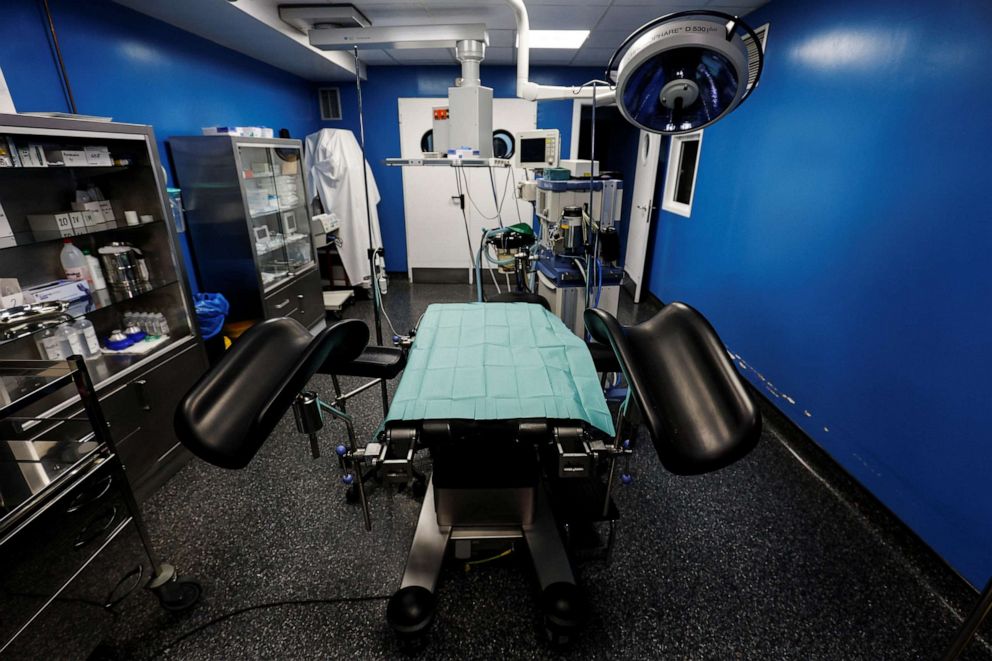 An operating room is seen at the private clinic Dator, which provides abortions, in Madrid, Spain, May 23, 2022. REUTERS/Susana Vera

Gray said she has seen a “sustained increase” in the number of patients seeking abortions in North Carolina after the Supreme Court decision, and that a significant number of them have come from neighboring states with strict abortion restrictions.

“When South Carolina had their strict ban in place, there were like six or seven weeks this summer we had a fairly high volume and then when Georgia law went into effect,” she said.

Having this increase can be logistically challenging, Gray said. North Carolina has a 72-hour waiting period before an abortion can be performed and providers are required to read a mandatory counseling script from the state, which includes information about public and private services available during pregnancy and possible adverse effects of abortion and pregnancy.

Critics say the script is a fear tactic to shame and scare people out of having abortions.

“So, there’s a lot of … logistics and requirements that have to be in place before people can get here, so it requires a lot of coordination,” Gray said. “We have someone who pretty much deals with … phone calls and logistics most day, every day that we’re in clinic.”

Clinics closing down or moving across state lines

Following the Supreme Court’s decision, several abortion clinics were forced to either shut down or move their practices out of state.

The Red River Women’s Clinic moved from Fargo, North Dakota, to Moorhead, Minnesota — a mile-and-a-half away — after Roe’s overturn due to the legal battles currently being waged in North Dakota, although abortion is still legal in the state.

Since opening on Aug.10, Tammi Kromenaker, director of RRWC, told ABC News it was bittersweet to move but they’ve found a rhythm.

“We’re providing care to patients in North Dakota, South Dakota, northwestern Minnesota; we have had a couple of gals from Texas come, like two,” she said. “We’re still able to see people in a very short amount of time, I feel like we’ve just like hit — I don’t want to call it ‘normal’ — but we’re back to seeing patients that we used to see in Fargo.”

She said the difference in political climate between North Dakota and Minnesota offers more freedom with abortion care.

“It’s so indescribable that we can just make an appointment with a person without having to go through telling them very stigmatizing awful language that the state made us used to say in North Dakota,” Kromenaker said. “Literally just being five minutes away, it’s the same community, but it’s such a stark contrast between the two states.”

Although Kromenaker and her colleagues are currently fighting legal battles in the state to prevent abortion bans from going into effect, she said she’s not sure if the clinic would ever move back or if she would open a second clinic in the Peace Garden State.

“There are so many onerous restrictions on providers in North Dakota, that unless or until those are taken away — I mean, we had to tell patients 24 hours ahead of time, ‘Abortion terminates the life of a whole separate unique living human being.’ We had to force materials from the state on women, they couldn’t refuse it, they had to receive it. We were restricted in our medication abortion regimen,” she explained.

“I need to see those … things go away before we would think about going back and providing care there. And I just don’t see, with the way North Dakota is right now, that happening for quite some time,” she added.