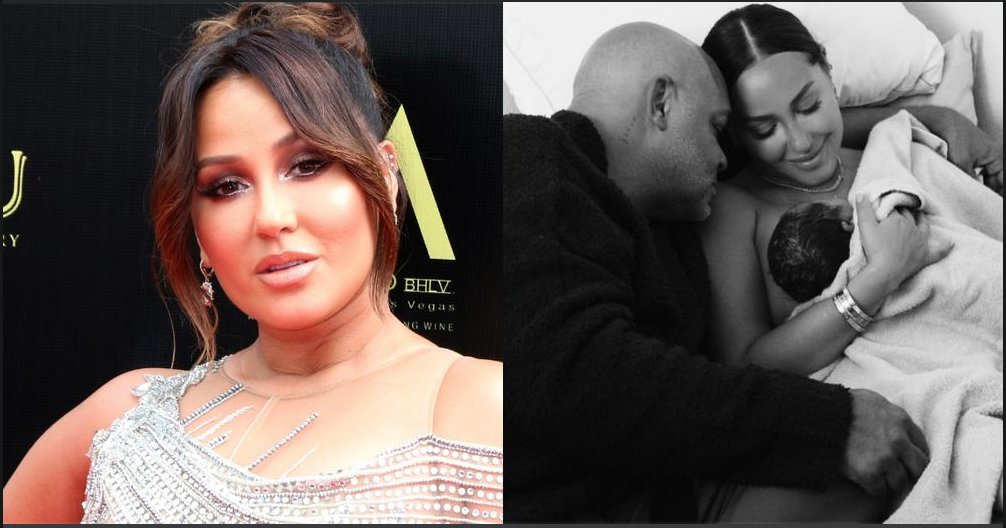 Supreme congratulations are in order for new parents, Israel and Adrienne Bailon Houghton! The couple recently took to Instagram to break the surprising news to their followers that they’ve extended their family and welcomed a baby boy. According to a joint statement released by the gospel singer Israel Houghton and his wife, former The Real co-host Adrienne Houghton, their newborn son is named Ever James Houghton. The couple expressed pure excitement and joy as they shared the news with their social media followers.

Many may be aware of Adrienne Houghton’s aspirations of being a mother and the challenging journey she’s had to get here. “For this child, we have prayed,” they shared on Instagram. The picture shows the new mom and dad cradling Ever while looking at him in sweet solace. The former 3LW and Cheetah Girls member married Israel Houghton in 2016. It was then that Adrienne Houghton became a stepmother to his four children from the gospel singer’s previous marriage and extramarital affairs. She soon expressed publicly that they desired to start their family together.

Adrienne Houghton shared in a New Years-themed episode of The Real in 2017 that her resolution for 2018 was to start her family with her husband. “That would be my biggest dream come true,” she said, adding that becoming a mother has always been something she’s wanted to accomplish. Later in 2018, Adrienne Houghton again became candid about her pregnancy struggles. She confessed that trying to conceive with her Grammy Award-winning husband was not as easy as she thought it would be. In addition, she spoke about the many instances of people inquiring about her pregnancy journey due to having a fuller face or sometimes fluctuating weight.

Adrienne Houghton spoke on the insensitive remarks she’s viewed or received from people. She included that while she thought the journey would be easy for her, she never foresaw the hurdles she’d have to jump. However, the television personality expressed that she had to find “peace” in the midst of the storm. “It’ll happen when it’s God’s timing,” said Adrienne Houghton on the show. But while she remained faithful to her beliefs, she admitted that the journey sometimes was very discouraging.

Adrienne Houghton also spoke on having preconceived notions of women having “wide hips” or even being a “Latina,” thinking that would make pregnancy easier to achieve. But none of those things helped her along in her journey. Nevertheless, Adrienne Houghton was persistent in her motherhood journey. Finally, in May of 2022, the former 3LW member declared her refusal to give up on her dreams of becoming a mother. “I am either the most resilient human being, or I’m wildly delusional. I’m either one or the other,” she said to her co-hosts on The Real.

Houghton shared the many processes she’s taken, from IVF to other tests. She admitted that there were more challenging days than the others, leaving her sad and tearful. But on the next day, she’d be back to picking baby names. “It’s not a question of will I be a mother; it’s a question of when,” said Adrienne Houghton. But, she continued that she would never break the promise she’s made to herself of becoming a mother. Thankfully, her resilience has finally paid off. All the years of prayers, doctor’s visits, and doing the work to become pregnant have given Adrienne Houghton and her husband, Israel, a son. The parents shared that they are “so in love” with Ever James on social media.

The couple spoke about their decision to keep this particular journey a secret. According to the joint statement, there were many tears, disappointments, IVF cycles, and sadly even miscarriages. But now that their son is here, Adrienne Houghton and Israel Houghton feel nothing but “overwhelming love and gratitude to God.” They also revealed that their son was brought into the world via a surrogate, whom they declared an “angel.”

“He’s here, and we have never been happier to lose sleep!” said Adrienne Houghton and Israel Houghton on Instagram. Congratulations to the happy couple!