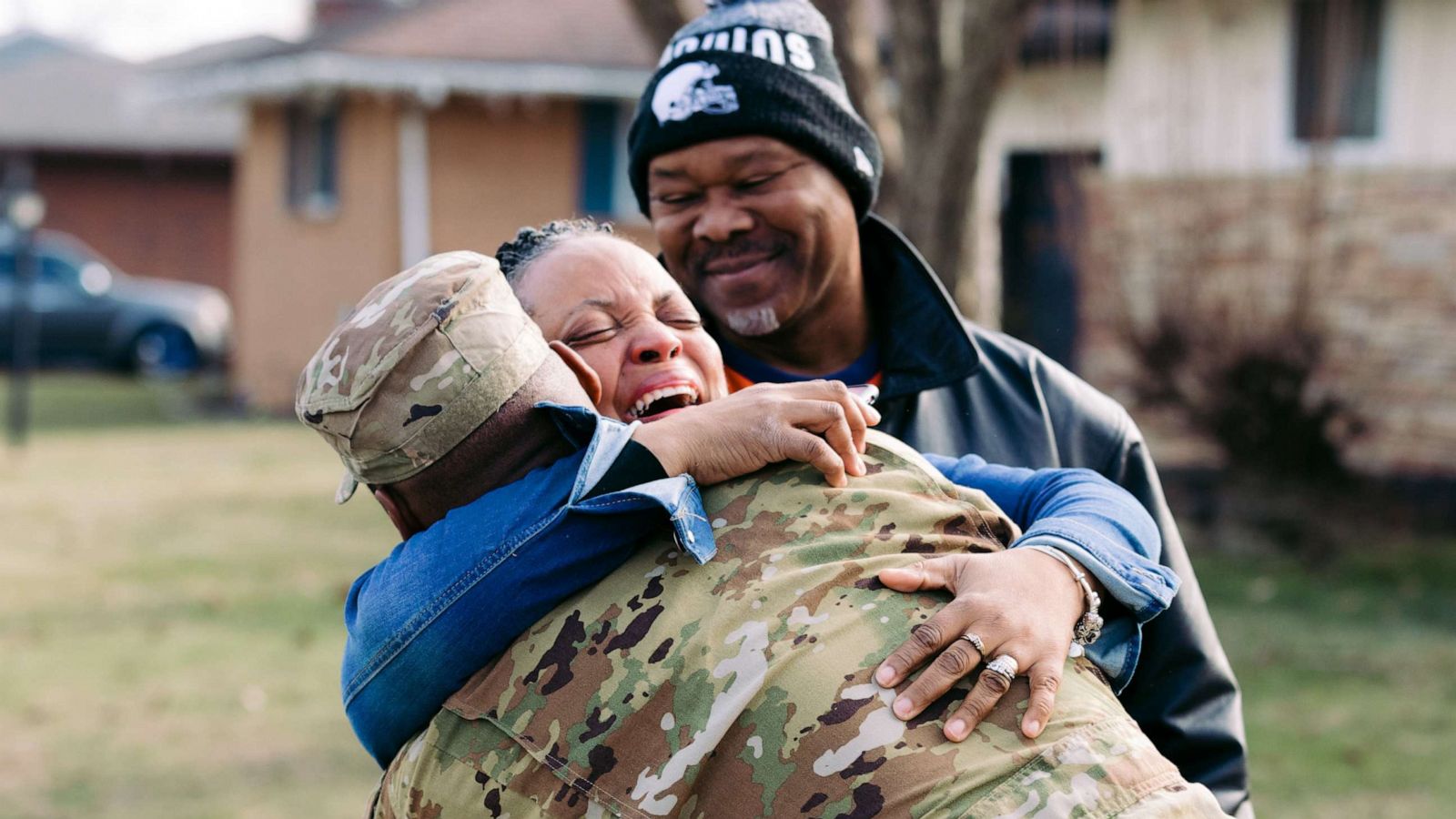 An Air Force member who had been stationed overseas pulled off a big surprise for his parents this week and ABC News Columbus affiliate WSYX was there to capture the emotional reunion.

Senior Airman Jaylen Spotts told WSYX he had been posted in Aviano, Italy, for the last three years since before the pandemic began and earlier this month, he was on the phone with his mom, Stacey Spotts, when he asked her a question.

“I asked her what she wanted for Christmas, and seeing me was one of the things she asked,” Spotts told WSYX. “So, I got on Google and found Operation H.O.M.E.”

Operation H.O.M.E. is a nonprofit cofounded by Byron Davis and his wife, Melissa Davis, in 2015.

“We raise money to purchase travel tickets for military members who can’t afford to get home for Christmas,” Davis told “Good Morning America” of the organization’s mission. “We purchase a ticket and it’s waiting for them at the airport if they choose to travel home.”

But this time, Davis had received word that 84 Lumber, a building materials supply company, was making a donation to Operation H.O.M.E. and he quickly came up with an idea. According to Davis, when he told Jaylen Spotts about it, the airman agreed to the plan.

“I called Jaylen … I said, ’84 Lumber has two locations in Columbus, Ohio and they’ve made a donation to our organization. I’m going to see if they would be willing to assist us in using their truck as a distraction to bring you home,'” Davis recalled to “GMA.” “And he and I talked a little bit. I said, ‘All you need to do is let your parents know that you’re sending a Christmas gift to their house. And I’ll take care of everything else.”

84 Lumber confirmed the company made a donation and helped Spotts with his epic surprise.

“We donated $15,000 to Operation H.O.M.E to help cover the costs of bringing enlisted soldiers home for the holidays. With our donation, we are proud to support Operation H.O.M.E as they reunite military families this holiday season,” Amy Smiley, vice president of marketing at 84 Lumber Company told “GMA” in a statement. “In addition to 84 Lumber’s $15,000 donation to Operation H.O.M.E., our Pataskala, Ohio location provided the materials to build the crate to carry out and deliver the soldier to his parent’s doorstep. We also supplied the truck to deliver the crate and two of our associates were there at the home to see the surprise happen.”

Operation H.O.M.E. and 84 Lumber worked to deliver the oversized crate to Spotts’ family home in Columbus and for a few minutes, an “excited and nervous” Jaylen Spotts jumped in before his parents were called outside to open the crate themselves. 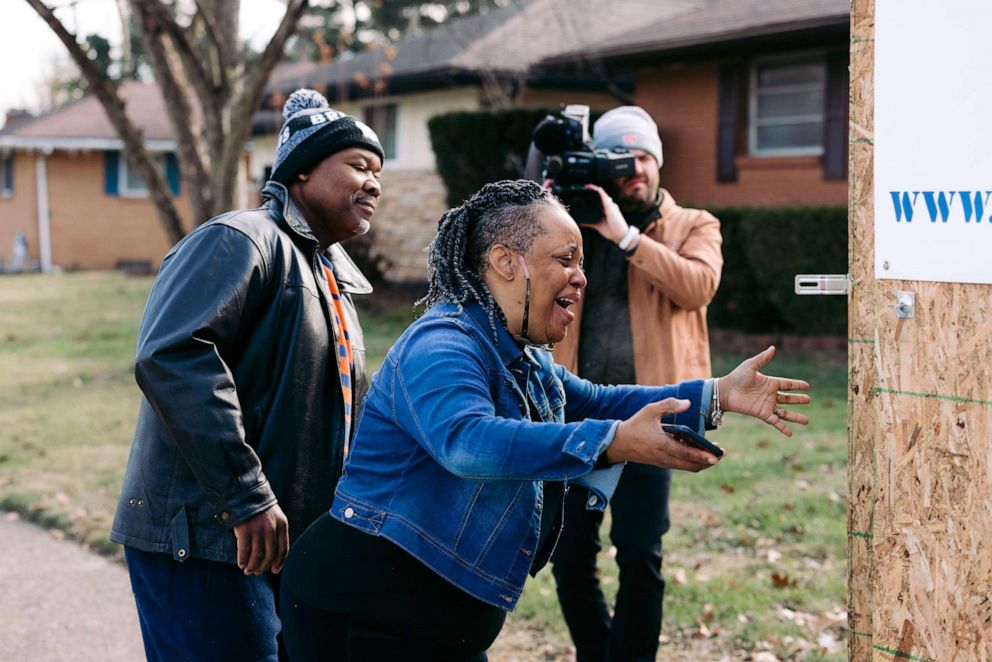 Stacey and Michael Spotts react after seeing their son Jaylen Spotts disguised in a makeshift crate. 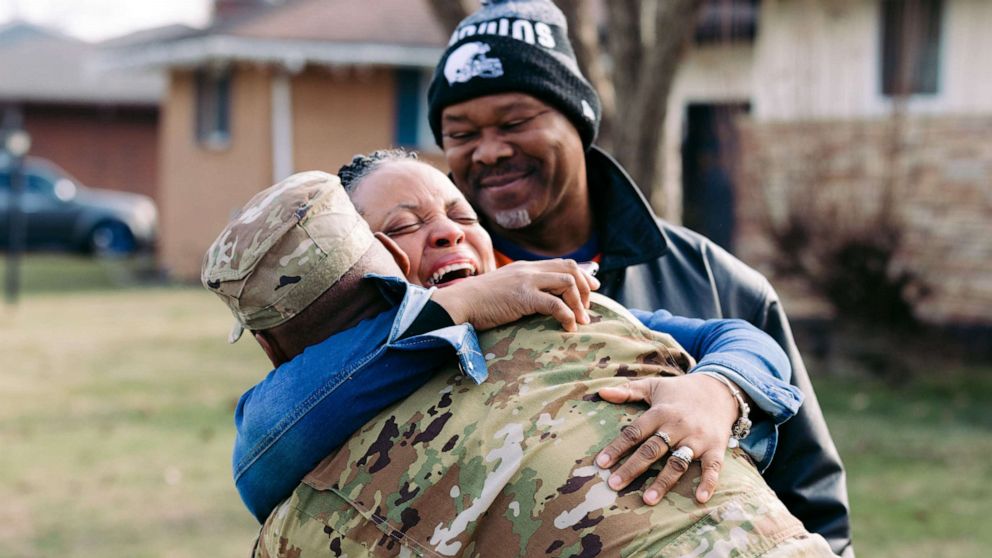 Senior Airman Jaylen Spotts gives his mom a hug after surprising her and his father in an emotional reunion this week.

Their reaction was priceless, with mom Stacey Spotts yelling out the moment she saw her son in person. Jaylen Spotts also wasted no time giving his mom the biggest hug.

“I am so happy,” Stacey Spotts told WSYX. “I just can’t believe my baby is home.”