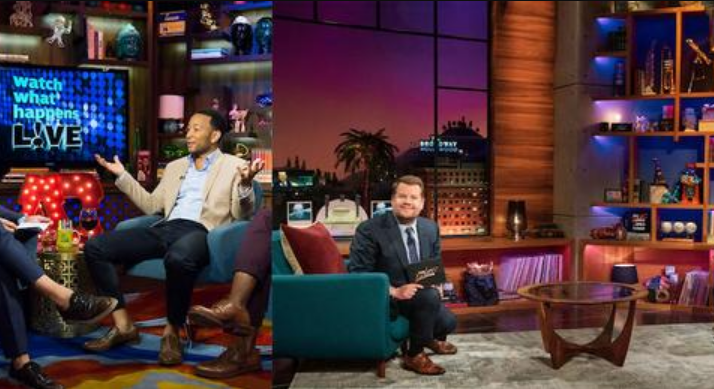 “[WWHL] was the first bar on late night [then] James Corden got a bar.”

The Bravo executive producer then said that “James Corden kind of wound up…” – before Bozzi completed his sentence by saying, “Ripping off your set.”

Elsewhere in the interview, Cohen got candid with his pal about feeling left out among the other late night television hosts.

“I don’t feel totally part of the [late night television] group and I have been on late night TV for 13 years,” he explained.

“Years ago, there was a big photoshoot that ‘Vanity Fair’ did of all of the late night talk show hosts and they left me out of it, but they added in James Corden who wasn’t even on the air yet and Trevor Noah who had just started.”

Cohen – who had been on the air for seven years at that point – noted that famed magazine editor Graydon Carter later apologized to him.

“Graydon later said, ‘You know what, you were right, you should’ve been in that,’” he recalled.

In addition to “WWHL,” Cohen is also gearing up to host a New Year’s Eve special on CNN with best friend Anderson Cooper. However, due to his behavior during last year’s live broadcast, the network has decided to limit his drinking.

Ryan Seacrest, who has been a longtime host of ABC’s “Dick Clark’s New Year’s Rockin’ Eve,” recently said he was in support of CNN’s decision.

“I don’t advocate drinking when one is on the air,” the ”American Idol” host told Entertainment Weekly Monday.

“I don’t know how that started as a tradition, but it’s probably a good idea [to scale back], CNN.”

Seacrest, 48, added, “There’s some pretty respectable people or at least one, right? I think there’s a serious journalist and then a friend of mine who has a lot of fun, but it’s probably a good idea.”