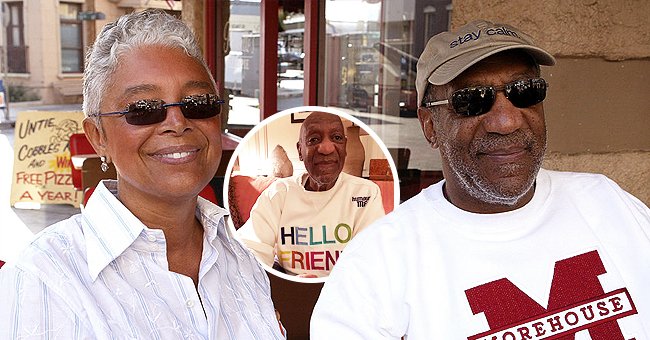 American actor and comedian Bill Cosby gave fans a glimpse of his new look in a new picture he shared with fans on Instagram on Monday to mark his 84th birthday.

In the snapshot, Bill sat on a sofa and was clad in a white sweatshirt with the words “Hello Friend” inscribed. The top also had “humor me” written at its top left-hand side.

Bill clasped his fingers and smiled as he posed for the snapshot. He also gave off a smile while flaunting his fresh haircut. In the post’s caption, the octogenarian revealed he got the haircut for his birthday dinner.

In the concluding part of his caption, Bill paid tribute to his wife, Camille Cosby, by using the words of the late singer and songwriter James Brown. He wrote:

“In the words of James Brown, ‘It’s A Man’s World But It Wouldn’t Be Nothing Without A Woman, Girl & Mrs. Camille Cosby.’

Before making that post, Bill also shared two pictures on his Instagram page that showed him posing in his white print sweatshirt. In the photos, he stood in front of a wall, put his hands together, and smiled.

In the post’s caption, the actor expressed gratitude to his fans for their support. He also thanked them for fighting for his freedom, staying grounded, and being on the case. He ended the caption by writing:

“The Revolution Is In The Home.”

Bill’s posts and messages came days after several women who previously accused him of sexual assault assembled at Philadelphia’s Independence Hall for a vigil to protest his release from prison.

The women carried several placards labeling Bill by different names, including Serial Rapist and America’s Predator, as they showed their displeasure with his release.

Despite the multiple challenges that have come his way, Camille has never lost faith in her husband or their marriage.

In its ruling, the court concluded that he should never have been prosecuted because of a deal he had with former Montgomery County prosecutor Bruce Castor.

Before his release, Bill had served about three years of his 3 to 10 years sentence. He was sentenced in 2018 for allegedly drugging and sexually assaulting Andrea Constand in 2004.

Bill’s wife, Camille, has stood with him throughout all his travails with the law. Hence, she was ecstatic ahead of his shocking release from jail.

When news broke out that Bill would regain his freedom, his attorney, Brian Perry, told Us Weekly that Camille was ecstatic, relieved, and happy. He also revealed that she lived near the Pennsylvania jail where Bill was incarcerated.

Bill started dating Camille when she was just 18. The couple went on a blind date at a bowling alley. At the time, he was in the District of Columbia for a gig while she was a student at the University of Maryland.

After the date, they started a long-distance relationship until their marriage in 1964. Bill was 26 when he married Camille, who was 19 and had just dropped out of school.

Camille’s parents were not pleased with the union, but the priest who officiated their wedding said the couple was well matched and that she was one of the most beautiful girls in her parish.

Despite the multiple challenges that have come his way, Camille has never lost faith in her husband or marriage. Instead, she has always believed in him.

Camille has always been her husband’s rock, and her unwavering support for him has helped him through. She deserves all the praise he showered on her in his recent post and more.