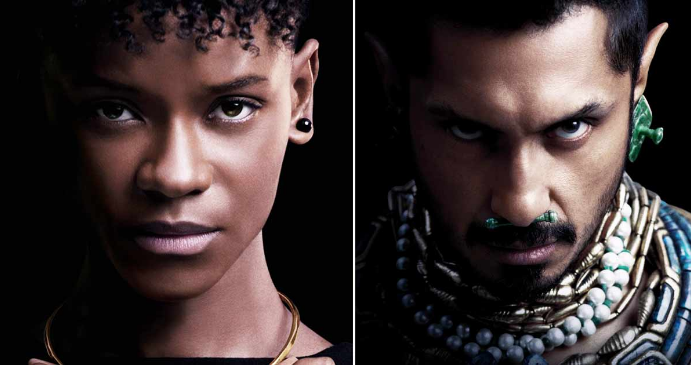 Actress Letitia Wright shares her thoughts on one of the biggest enemies Namor that Wakanda has to face in the upcoming film ‘Black Panther: Wakanda Forever’.

In Marvel Studios’ ‘Black Panther: Wakanda Forever’, Queen Ramonda, Shuri, M’Baku, Okoye and Dora Milaje fight to protect their nation from intervening world powers in the wake of King T’Challa‘s death. When Namor, king of a hidden undersea nation, alerts them to a global threat and his disturbing plan to thwart it, the Wakandans band together with the help of War Dog Nakia and Everett Ross and forge a new path for the kingdom of Wakanda.

Letitia Wright said: “The introduction to Namor is really interesting. In this intimate moment where we think we’re having some sort of breakthrough between Shuri and Ramonda, out comes Namor. It’s freaky. He’s popping out of the water and coming at us. We see Ramonda and Shuri transform from a mother and daughter having a conversation into protective warrior mode.

“We learn about Namor and his kingdom early on-that he is the king of an underwater civilisation. Namor and the Talokanil people are inspired by Mesoamerican history. I think that’s beautiful because we have a huge platform for this history to be celebrated, to be acknowledged by the world. This film allowed me to open up a textbook, do my research and discover how beautiful and wonderful this history is. This is shining a light on the culture of a people that may have been hidden.

Letitia added: “And it’s beautiful to see the different ways in which the different departments have come together to celebrate this, whether it be Ruth Carter, with the detail, beauty and colours in the costumes, or Hannah (Beachler), who doesn’t miss a beat in terms of our production design. It’s beautiful to see them really go the extra mile to get the resources and the knowledge and infuse them into this film.”

“In the first film, ‘Black Panther’, Wakanda is definitely expressing the different colours and cultures within the African continent, right? Now we’re doing this with Mesoamerican culture and combining it together. So, I’m feeling it. I think it’s so dope,” Letitia Wright said.