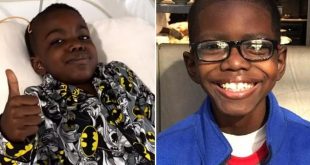 Falling down flight of stairs is usually not a fun situation for just about anyone – especially if you live to tell the tale.

Broken bones, bruises, and possibly even d’eath are on the list for those who have to be whisked off to the emergency room.

In the case of this 8-year-old boy named Cameron Scott, however, it was probably a good thing that he did fall down badly enough to be sent to the hospital after all.

In 2017, Cameron had suffered some serious back injury following a tumble down a flight of stairs.

Alarming, but nothing completely unexpected – it would have been more miraculous to get away scot-free from a fall like that, after all.

However, a trip to the hospital would quickly show that there was more than meets the eye.

The boy’s mother, Tamika Scott, recalled how the whole ordeal came across as highly surreal at the time.

While the parents were being shown pictures of the MRI scan of Cameron’s back and spine, the doctor that was supervising noticed something even more dangerous than simply a few broken bones.

The doctor immediately surprised all by calling for a second MRI scan, but in a different location – upwards, towards the neck and brain.

As it turns out, the doctor had spotted cancer tumours trailing down Cameron’s spine.

The second MRI scan that, unbeknown to everyone, Cameron had been quietly suffering from a form of brain cancer called medulloblastoma.

It was visible by the tumor spotted at the base of the boy’s brain, and it was evident it had quickly grown into a stage four cancer, which was also considered a high-risk cancer.

Doctors immediately went into gear to battle the rapidly-spreading disease, and the boy was wheeled into an operating theatre as soon as possible.

There, Cameron had to undergo a surgery that was four hours long, where all the tumours in his body were removed.

Afterwards, he was sent to St Jude hospital for further treatment.

There is a reason for this decision – St Jude at the time was on the bleeding edge of cancer research, and was pioneering a form of cancer treatment.

The goal of such a treatment was to use gene sequencing in order to target the cancer itself to an astonishing degree.

It was here that it was discovered Cameron’s cancer was not simply a single disease in and of itself, but rather four different types that had worked together.

Recovery was a long and arduous process for the little boy.

Cameron had to endure chemotherapy and radiation for six months before he was declared cancer-free. And cancer-free he really is!

It must be a relief for his parents to know their son is no longer in imminent danger of dying.

On top of that, St. Jude has covered the entirety of the boy’s medical expenses, so the family doesn’t have to worry about paying back medical costs!