Boy, 7, says he’s ‘proud of his scar’ after jumping in front of vicious dog to save his sister 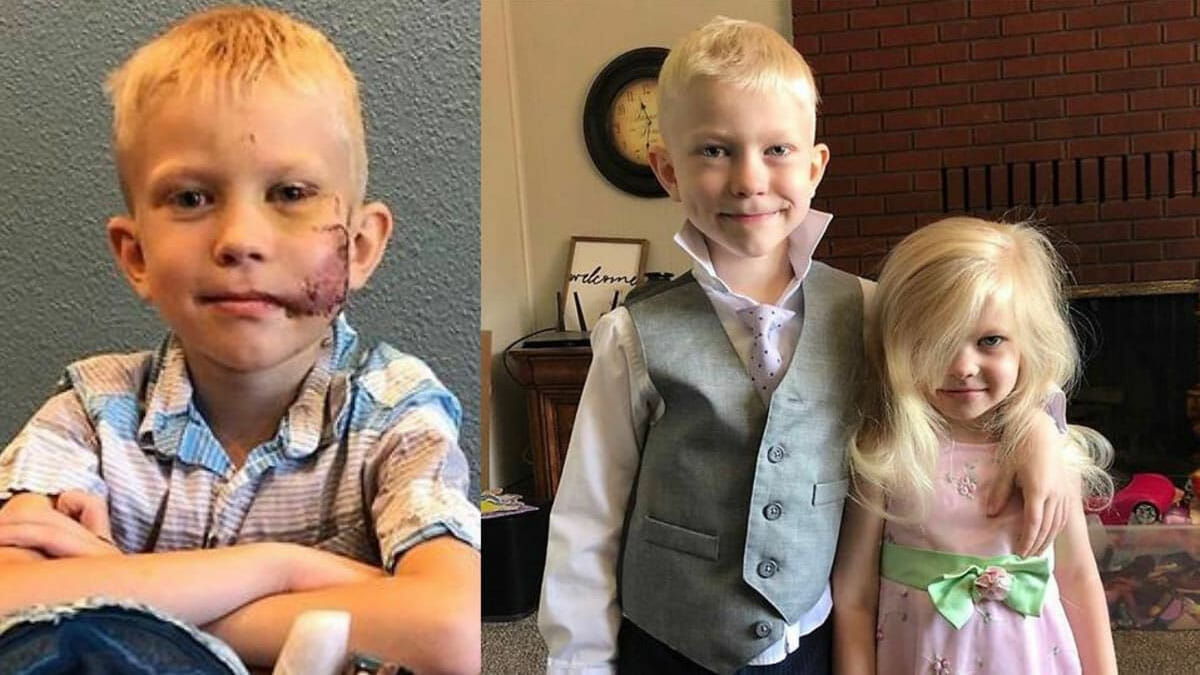 A 7-year-old boy who jumped in front of a vicious dog to save his little sister says he’s proud of his scars.

Bridger Walker was at a friend’s house in Wyoming with his 4-year-old sister in July 2020 when a 1-year-old German Shepherd mix lunged at them while they were outside in the backyard.

Bridger, then 6 years old, without hesitation stepped in front of his sister to protect her and was bitten in the face by the dog, NBC News reported in July 2020, citing the siblings’ parents.

The youngster was left with nasty facial scars and has since undergone multiple surgeries to repair the wound, which needed 90 stitches.

But Bridger said at the time, “If someone had to die, I thought it should be me.”

The now 7-year-old still stands by those words. His dad Robert Walker said his son isn’t even bothered by his scar – he’s proud of it.

“Bridger views his scar as something to be proud of, but he also doesn’t see it as being representative of his brave act. He just perceives it as, ‘I was a brother and that’s what brothers do.’ It’s a reminder that his sister didn’t get hurt, and that she is okay.”

A year ago, Bridger Walker showed the world the courage that a human being can have. He saved his sister and because of that, he became an honorary world champion. Bridger Walker: “The bravest man on Earth”.

His aunt, Nikki Walker, shared his story at the time. Writing on Instagram, the proud aunt said this: “My nephew is a hero who saved his little sister from an attacking dog.”

She continued: “He, himself, took on the attack so that the dog wouldn’t get his sister. He later said, ‘If someone was going to die, I thought it should be me.’ He got home from the hospital last night. I know it’s a long shot, but I’m reaching out to the Avengers and other heroes so that they can learn about this latest addition to their ranks.”

In her post she tagged a number of “superhero” celebrities including Robert Downey Jr, who played Ironman and Chris Evans, who played Captain America, and they both responded to the story with video messages for the young hero.

But Bridger’s dad said his son isn’t comfortable with being called a hero.

“It almost bothers him sometimes when he’s called a hero, because he [thinks], ‘Maybe I could have done more to shield her,’” he said.

The family is so grateful that so many of their son’s heroes have reached out.

Chris Evans, his video was amazing and he sent the shield. Bridger couldn’t have been more delighted,” his dad said. “When he talked to Tom Holland, he was probably the most starstruck because that was a live call so that one certainly left an impression… His emotional recovery was really a worldwide effort and that was so special to us.”

Despite Bridger having to endure so many surgeries, there is still more work to be done.

“We still have a little bit more work to do on the superficial, redness part of it, but structurally everything looks so much better,” dermatologist, Dr. Dhaval Bhanusali said, who, after seeing his story, offered to fly him to his

“I always told Robert, ‘When Bridger’s in junior high or high school, I want this to be a story he tells, not a memory he has to relive every day.’ And I think we will have that situation,” the big-hearted doctor added.

Other Hollywood celebrities who have reached out include Anne Hathaway and Mark Ruffalo.

What a hero Bridger is; his selfless act is an inspiration and I’m glad he’s recovering well and getting all the love and attention he deserves.