Brad Pitt Gets Dumped By Emily Ratajkowski “For A Whole Lot Hotter Guy Than Him & With Much Less Baggage”? 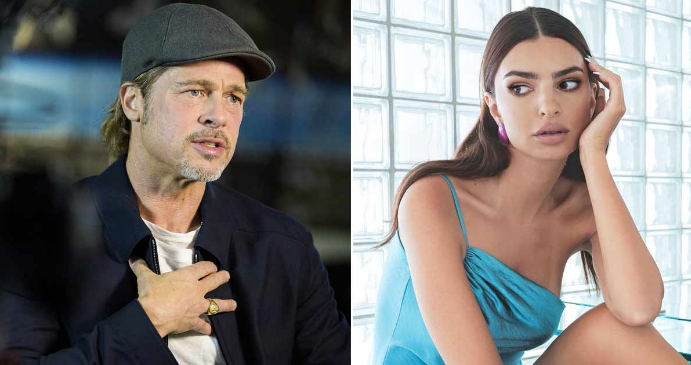 What happened to Brad Pitt and Emily Ratajkowski? Recently, it was speculated that the two are dating after the Once Upon a Time in Hollywood actor allegedly said he is open to finding new lady love. Rumours began that he and the model are a thing, but they are taking it slow.

It was also said that Brad is afraid of Angelina Jolie as she may badmouth him in front of their kids if things get serious with Emily. However, amidst all of this, the model said that she is single and just after that, she was spotted making out with a mystery man.

The man that Emily Ratajkowski was seen with was not Brad Pitt. So did the two date? A new source has revealed to Globe magazine that the Fight Club actor was dumped by Ratajkowski. However, they said that Pitt is not used to being the one who is dumped, and instead, he used to always find it easy to court and be with any woman that he was interested in.

“He’s not used to being dumped or snubbed, but that’s the grim reality of what’s happened,” the insider said. Brad Pitt “was telling everyone how incredible Emily Ratajkowski was, that he saw the long-term potential and couldn’t wait to spend more time and get to know her better,” they added. “All of a sudden she’s stepped out with this other guy and doesn’t seem to give a rat’s butt about Brad, which is a real kick in the teeth and a huge blow to his ego.”

The insider also claimed that his split with Emily helped Brad focus on the other drama in his life. For the unversed, the actor was accused of abusing his ex-wife Angelina Jolie and their kids. “A lot of folks were surprised that he’d actually found the time to date, but he was totally captivated by Emily after they were introduced through mutual friends and put a lot of things to one side to win her over,” they told the outlet.

The source continued to say that Emily Ratajkowski “finds this guy a whole lot hotter than Brad Pitt and with much less baggage.”