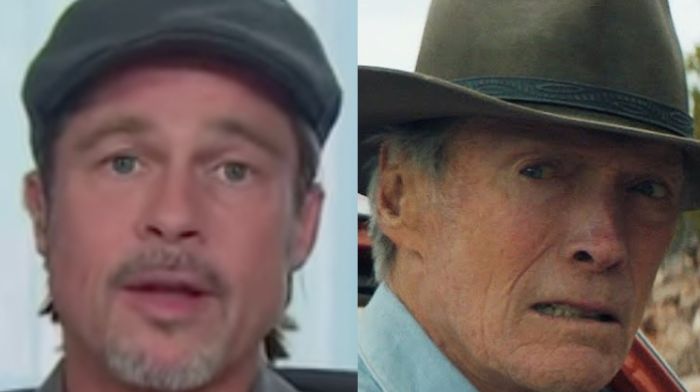 Brad Pitt, who recently wore a skirt to a movie premiere, is slamming the “Clint Eastwood” style of masculinity, saying it’s “exhausting.”

Hollywood star Brad Pitt is speaking out this week to slam the style of masculinity that was popularized by Clint Eastwood, describing it as “exhausting.”

“It’s just exhausting to be anything but who you are,” Pitt told the Financial Times. “You have to understand, at least where I grew up, we’re more the Clint Eastwood character: you hold everything within, you’re capable, you can deal with anything, you don’t show weakness. I see that in my dad and the older generations of actors, and, man, it’s exhausting.”

“As I get older, I find such a comfort in friendships where you can be [completely yourself], and I want that to extend in the outer world,” he added. “What people make of it: I’m fine. I feel safe here because there’s a focus on our struggles as human beings, because it’s fraught with peril. And joy as well.”

This comes after Pitt made headlines earlier this year by wearing a skirt to the premiere of his movie Bullet Train.

“We’re all going to die, so let’s mess it up,” Pitt justified at the time, according to Variety.

According to the Daily Mail, Pitt went on to say that he is a “largely self-taught” artist who got into sculpting as part of his emotional rebirth after his brutal divorce battle with his ex-wife Angelina Jolie.

“I was looking at my own life and really concentrating on owning my own shit: where was I complicit in failures in my relationships, where have I misstepped,” he explained. “For me, it was born out of ownership of what I call a radical inventory of self, getting really brutally honest with me, and taking account of those I may have hurt.”

In contrast to Pitt, who clearly has gone soft after years in Hollywood, Eastwood has been known for embodying what it means to be tough and masculine for decades. His approach to masculinity is epitomized by his “Eastwood Code,” which he passed down to his eight children. Eastwood’s son Scott opened up about what this code means in a 2017 interview.

“Whatever you’re doing, you actually try to do your best at it every time,” he said of the code, according to The Express. “Just do it and then move on. You don’t ever backstab people or f* someone over — you don’t have integrity if you do that. You show up on time for stuff. And you don’t b** and complain about what you’re doing.”

What’s so “exhausting” about that?!

It’s sad that we now live in a time where masculinity and toughness are looked down upon, and a man like Pitt wearing a skirt is glorified. In the end, we need a whole lot more Clint Eastwoods in the world, and far fewer Brad Pitts.