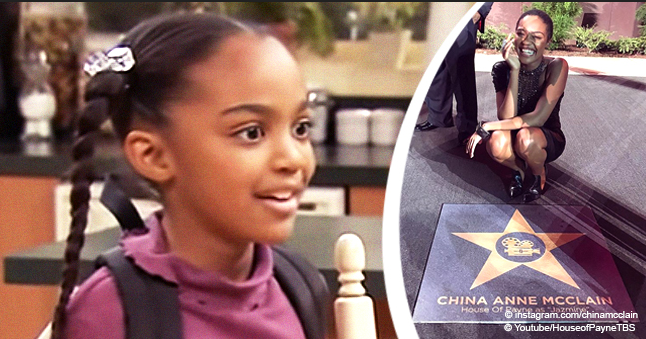 China McClain’s career started in 2005 when she starred in the movie “The Gospel,” according to T.V. Over Mind.

After that, she appeared in Tyler Perry’s “Daddy’s Little Girls,” along with her two sisters and actor Idris Elba.

Not only has China featured in other movies and T.V. shows since then, but she’s also no longer a young child as The Famous PEOPLE shares.

The actress is 21 years old and has a Star in her honor at Tyler Perry’s recently opened studio.

The “A.N.T. Farm” actress shared the news via her Instagram by posting a picture of her squatting before the Star.

Using her caption to appreciate Tyler, China stated that it’s a moment she will ‘never forget.’

Over 800,000 fans have liked the post and congratulated the actress since she made the revelation a few days ago.

In celebration of the studio’s opening, Essence reports that entertainment heavyweights like Spike Lee, Ava DuVernay, Beyoncé, Jay Z, and Halle Berry, made an appearance.
As the article narrates, Tyler purchased the land on June 2015, and today it holds 12 sound stages for movie productions.

Besides getting the Star at Tyler’s studio, China’s musical career is also going smoothly as A.J.C. narrates. According to the article, China featured in the 2014 reality singing series “Sing Your Face Off,” which saw her portraying different singers.

The then 15-year-old claimed that she had to be ‘sophisticated’ when channeling award-winning singer, Rihanna.

Her hair is yet another aspect of her life that China is proud of as Essence points out
.
The former Disney queen took to Instagram to share a photo of her showing off her natural hair. In the pic, the then 18-year-old is rocking a black crop top and joggers.

In the post’s caption, the “Descendents” star declared that she wasn’t ‘straightening this magic’ anymore. In her words:

“I’m a black girl, and I’m hella proud, and whether you are black, white, brown, yellow, red, green, or purple, you should be proud too because you’re BEAUTIFUL.”