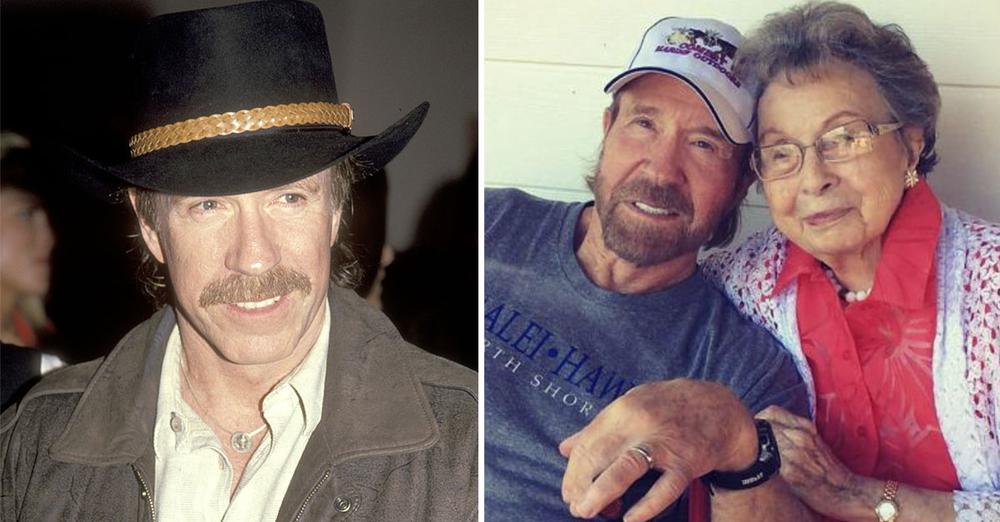 Chuck Norris is perhaps one of the most prolific celebrities of his generation. The 82-year-old made a career out of marital arts and acting and is still respected by millions around the world today.

But for Norris, the number one person in his life will perhaps always be his mother…

Chuck Norris is a household name because of his many achievements in martial arts, the number of belts he has, and his acting career. But perhaps the titles he wears with the most pride and loving son and doting husband!

The actor’s mother Wilma Norris is someone he has often mentioned for the influence she has had over his life. He has talked about the immense strength of her character in being able to raise three sons as a single mother, at a time when the world was not too kind to single moms.

Last year for mother’s day the actor paid tribute to both his mother and his wife Gena, crediting them for the positive influence they have had over his life.

Coincidentally, his mother’s birthday fell on the same day, and she turned a 100 years old, prompting her son to add, “I love you, Mom! Happy 100th birthday!”

Chuck has often talked about how his mother is still an active member of the community and is someone who prays often! He said that she prayed for the success of his career but did not stop there, “She even prayed for me to find a woman to change my life, and it worked.”

Wilma battled adverse circumstances to be where she is today. She was born in a house stricken with poverty. Later on in life, she struggled but managed to raise her three sons on her own as her husband, who was their father, abandoned the family early on.

But even on her own, she managed to raise three gentlemen. Imparting knowledge of faith in them and helping them become self-sufficient so that they would know nothing is impossible.

And her faith in her children, and imparting such a belief had a tangible impact as we saw Chuck Norris embark on a high successful career in Hollywood as a martial artist.

His wife started showing symptoms of arthritis 10 years into the marriage. She was scheduled for an MRI and other screening and treatments but it backfired. This made her unwell, and to go back to her former healthy self, she required 24-hour nursing care.

Chuck faced the challenge head on. “My whole life right now is about keeping her alive,” he said.

The family man made sure to focus on his wife’s treatment and was by her side throughout her sickness, putting his career aside.

In May of this year, the matriarch of the Norris family, Wilma turned 101 years old. Her son Chuck was the first to make a post about it for his mom to honor her life so far. The caption for the post read, “Happy Birthday Mom! 101 years YOUNG! WOW! There are no words to describe how much I love and appreciate you. Thank you for everything you have done for us over the many years God has blessed us together.”

Chuck has always been vocal about his love for his mother, making sure everyone knows just how special she is to him. His immense love for her stems from her childhood, he said in an interview once, “When I was born, I almost died from complications. When nearly losing my soul to Hollywood a few decades ago, she was back home praying for my success and salvation.”

Wilma Norris did not have an easy life. She grew up in abject poverty so severe that she became a state child at just eight years old.

She lived in a hospital for two years as she underwent treatment for a rare disease. After she grew up she met Ray and married and had three children. Ray was a World War veteran, who returned to America with a missing limb and a drinking problem.

His problem with alcohol made it hard for him to hold down a job. He was unable to financially support the family. This prompted Wilma to move herself and her three boys to Wilson, Oklahoma.

Even though this was the era of the Great Depression, Chuck has often shared with fans how her mother’s faith never faltered and she made sure to always believe things would be better.

The actor said of his mother, “Mom has been an example of perseverance and faith her whole life. She’s also endured the deaths of her two husbands, a stepson, two grandchildren, and my younger brother Wieland in the Vietnam War. She’s had cancer repeatedly and has undergone roughly 30 different surgeries for various issues – yet she’s still here to tell about it.”

In 2012, Wilma made a rare appearance on the Mike Huckabee show to discuss her life and family. On what made her parenting successful, she said she observed prayer time regularly with her sons and made sure everyone attended church regularly.

She advised young parents, “Give them lots of love. Take them to church and Sunday school. But you see God didn’t give us our children. He only loaned them to us for a while.”

Wilma Norris is indeed an inspiration. Even at 101 years old, the matriarch of the Norris family is still going strong.

Share this article so others can also learn from the 101-year-old’s wisdom to raising good children and living a fulfilled life.