Couple Who Struggled To Get Pregnant Welcome Baby Boy After 13 Years Of Trying. 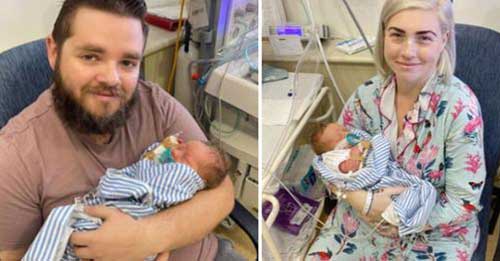 Carissa Morris, 33, and her husband Dave, 32, had their first child, “Oliver,” on December 17. After a heartbreaking eight miscarriages and suffering the stillbirth of a young girl, the Australian couple finally became pregnant in April after one round of ICSI I.V.F.

Oliver weighed 6lb 7oz when he was born. Carissa an engineering planner explained they tried for years and years naturally to have a baby, they did originally conceive quite a few times, however simply had many miscarriages and never got past six weeks. They eventually had tests done and worked out that one of her tubes was blocked and the fluids were coming back into her uterus. After she had her tube removed, they discovered that they also had male factor reproductive troubles.

The husband’s fertility was a problem, and they were informed it was due to his job, since too much heat can impact male fertility. Nobody ever cautioned them, no one ever warned them that too much heat would create.

We were then recommended to undergo ICSI I.V.F, in which the sperm is inserted directly into the uterus for the highest probability of conceiving. They were quite fortunate; they had a complete round of I.V.F. and sadly, we did not have any embryos make it to freeze. So, they just got their one embryo that could be freshly transferred, and two weeks later they learned they were pregnant.

Learning she was pregnant was arguably the nicest sensation she had ever had in the world, second to holding him for the first time. Carissa said the new family will spend Christmas Day in bed since Oliver had complications immediately after delivery.

“He was three weeks early and was born blue, his oxygen dropped to 20% for nine minutes and he immediately intubated,” she explained. Nurses and physicians worked on him for three hours to stabilize him. After he was stabilised, they had the NETS group, which is the Neonatal Emergency Transport Service, come in and place him in their Neonatal Ambulance.

Before he left, all she could do was touch his chin with her finger, so the fact that she could embrace him in her arms 30 hours later was nothing short of a miracle. “It was fantastic to be able to hold Oliver for the first time; he definitely has everyone wrapped around his finger,” she continued.

Carissa and Dave are eager to bring their newborn child home once he is well enough. Carissa said that he is presently being fed 45ml every feed through a nasal gastric tube as he does not have a suck reflux.

He began with a gastric tube since it was suspected that he had an obstruction in his stomach and would require surgery. They had scans and he doesn’t have that, which is excellent, but he will be stomach tube fed to ensure he doesn’t lose weight. They will spend Christmas Day with him in the NICU, celebrate Christmas after he gets out of it, and give him all of his presents. They were hoping he’d be out before Christmas, but that’s not going to happen, and they know he’s in the finest possible environment to receive the care he requires.

Congratulations to the wonderful family and praying this family will always be happy.