Disabled man was stuck in snowbank, woman heard his cries and saved his life on Christmas Eve. 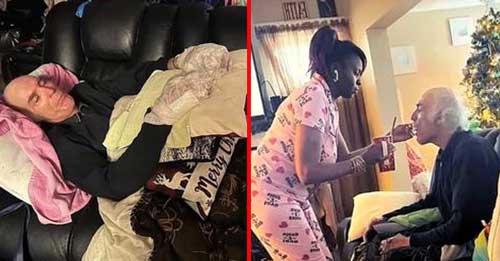 As the Buffalo region recovers from a “disastrous” winter storm, stories of survival and strangers helping strangers emerge. One lady has been dubbed an “angel” for perhaps saving the life of a 64-year-old man.

On Christmas Eve, Sha’Kyra Aughtry pulled Joe White inside her Buffalo house after hearing him beg for help outdoors in the frigid weather. She dialed 911, but no emergency personnel arrived.

Aughtry used a blow dryer to melt the ice off White’s hands, which were red and blistered, she claimed in a Facebook video in which she begged for help in obtaining him medical treatment. Good Samaritans subsequently arrived to transport White and Aughtry to the hospital.

Yvonne White, White’s sister, expressed on Wednesday that her brother would not have lived if it hadn’t been for Aughtry.

Yvonne stated that her brother is in good condition at the hospital.

Yvonne described Aughtry’s actions as “wonderful,” noting that she and her brother now have an extended family member.

Another wonderful story is National Guardsman Matthew Waldman, who assisted a couple in getting to the hospital to deliver their fourth child after their automobile became stuck in the snow.

Others, sadly, have not been so lucky. The storm’s death toll in Erie County has risen to 34, with the bulk of those killed in Buffalo, according to Erie County Executive Mark Poloncarz on Wednesday.

As the work to clear all Buffalo roadways proceeded, Poloncarz said the National Guard was going door-to-door to check on residents in neighborhoods that had lost electricity.

They are concerned that there may have been persons who died while living alone, he added.