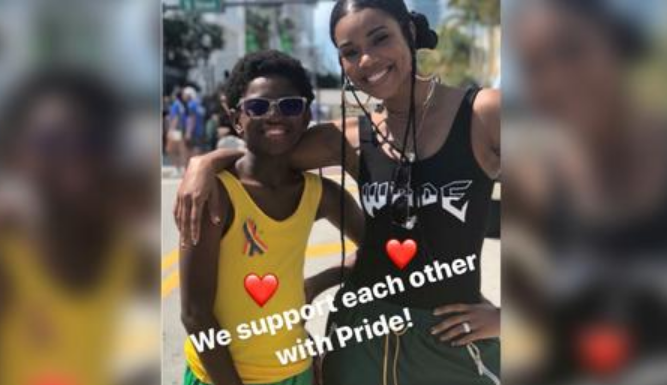 It’s A Celebration
Miami Beach Pride is a weeklong celebration with special events and a 2-day festival and Parade.

The mission of Miami Beach Pride is to “bring together members of the lesbian, gay, bisexual, and transgender community, their friends, allies, and supporters in celebration of the unique spirit and culture of the LGBTQ community.”

Dwyane Wade and Gabrielle Union have a daughter Kaavia, whom was born to him and Gabrielle via surrogate late last year. Wade also has three children from a previous relationships. His two sons Zaire (17) and Zion (11) are with ex wife, Siohvaughn Funches. He also has a 5-year-old son Xavier with ex Basketball Wives cast member Aja Metoyer.

This weekend in Miami, Zion Wade, 11 had the support of his family, including his step-mom Gabrielle Union and his older brother Zaire Wade, at the celebration on Sunday.

Dwyane Wade Supports His Son
Dwyane Wade could not physically be at the event, because the NBA star is in the very active season in the NBA. So he supported his son in a photo he posted of Zion and Gabrielle posing together. Dwyane captioned, “We support each other with pride”.

Zion’s brother also took to Instagram to share the same sentiment as his dad. He wrote along with a photo of him and his brother, “Love you bro, no matter what. Gotcha back, kid. Support gang!”

In a third photo, Zion is with his family while carrying a rainbow flag. Wade posted it on his Instagram story, and captioned the photo, “Zion had his own cheering section today. Wish I was there to see you smile”

Dwyane Wade Gets Criticized for Bad Parenting
We reported that Wade’s 11-year-old son, Zion strutted his stuff on a runway a few weeks ago, even twirling at one point as Gabrielle Union screamed in excitement. Wade would later have a proud papa moment, sharing the clip of Zion’s walk in his InstaStories with the caption, “Killing sh-t.”

Many people made comments in reference to the Zions manner and then criticized the 37-year-old for encouraging his son. Comments erupted like this one from a man on Twitter which said, “Fathers please don’t allow your children to bend and conform to societal pressures”. However, apparently, Wade had no issue in how Zion walked the runway.

This is a successful man, loving and supporting his Son, just as any parent would. People need to move on…ain’t nothing going on here but love and support.