Garbage man shows up with birthday cake for 100-year-old woman, and she can’t hide her emotion 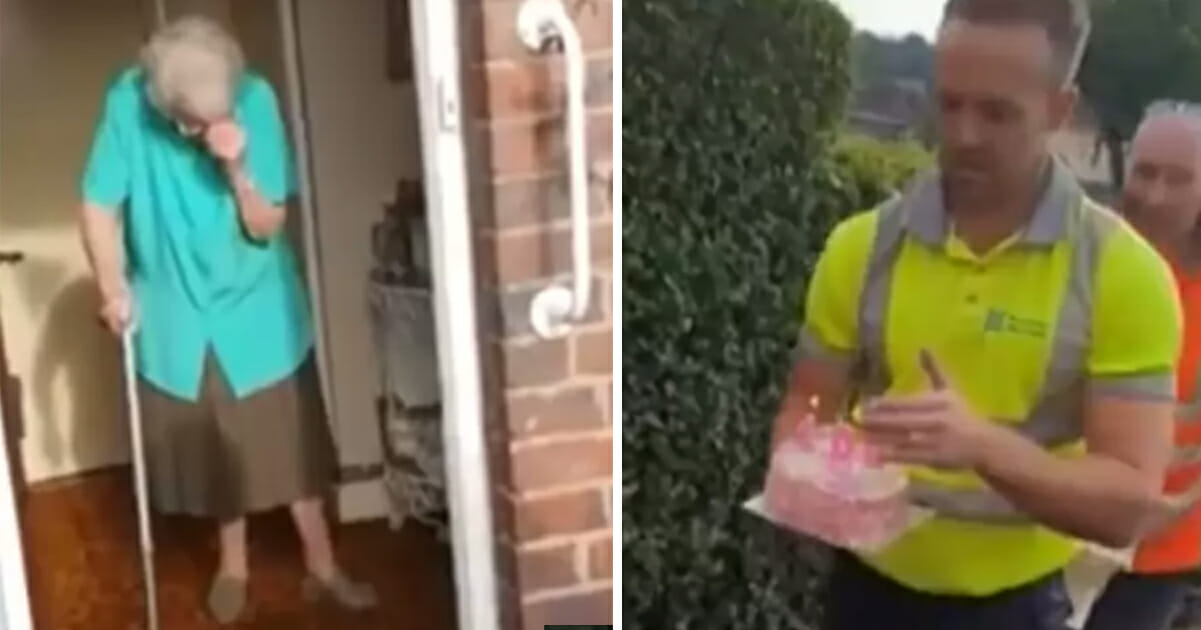 I don’t know about you, but as the years pass and I get older, I just can’t help but shake the feeling that there are certain, positive aspects of society that seem to have forgotten in the sands of time.

The idea of respect is one that people commonly refer to. Not only respect for our parents, but also respect for teachers, police officers, nurses and farmers, amongst others.

Yet I think the thing I miss the most from my childhood is a sense of community spirit and love. To try and better define it, I would perhaps describe it as the feeling that the people who live in the same area – be that of a city, small town, or even village – almost become one big family.

Put it this way: when I was young, I could tell you the names of everyone on my street. I could go down the road and be welcomed in virtually every house. I said hello to the milk man and the mail man whenever they came by, and could play out until dark safe in the knowledge that any and all of the adults who lived close by my parent’s house would look out for me.

Now, sure there exist such close communities still today, but they’re a dying breed, sad as that is to say.

Which is why stories like this one really go some way towards warming my soul.

Ben Bird has worked as a garbage man in the Midlands, UK, for many years. The nature of his job means that he comes into contact with the public – taking care of the same houses means that, naturally, he sees a lot of the same people while doing his rounds.

Yet there was always one individual who he liked to take extra time to talk to.

As Ben himself explained, the highlight of his week was conversing with retiree Mercy Ballard.

According to reports, Ben would deal with Mercy’s garbage every Thursday, and eventually the two struck up a conversation. It proved to be the beginning of an unlikely friendship.

“Where’s my favorite lady?” Ben would ask, and Mercy would open the door to talk to him.

It was during one such ‘talk’ that Mercy happened to mention that she was in her 90s. Ben told her there and then that he looked forward to singing her Happy Birthday on the day that she turned 100.

So the years passed and the pair continued their weekly discussions. Fortunately, Mercy remained in good health, and one day let slip that her 100th birthday was coming up.

Ben, being a man of his word, remembered the promise he had made to Mercy years before. Not only that, though, but he decided to go a step further and fix a little surprise for her.

The day that Mercy turned 100, Ben went out to a local bakery and chose a cake to give to his dear friend. He even decorated it with candles to mark Mercy’s tremendous milestone!

On the morning of her birthday, Mercy woke up to find Ben and a number of his colleagues at her door with the cake. When she stepped outside to greet them, they began to sing her Happy Birthday.

Mercy was so touched that she began to cry …

Luckily, for us all, the tear-jerking gesture was captured on film by one of Ben’s fellow garbage men. Perhaps unsurprisingly, the clip proved to a be a huge hit online, getting over four million views on YouTube!

In fact, word of Ben’s gesture spread so far that news crews paid a visit to Mercy’s house so that they could interview the pair on her sofa. The newly-turned 100-year-old even received a birthday card from Queen Elizabeth.

Mercy told ITV News: “There ain’t many young men that takes interest in an old woman. He’s such a lovely lad.”

Watch the video of Mercy and Ben’s interview below:

I don’t know about you, but I simply can’t get enough of Ben and Mercy’s friendship! I think the world could do with a little more positivity, and it’s often the smallest gestures that have the farthest reaching effects.

Do you also miss the days where close-knit communities were common place and acts of kindness held a place of special importance in society?

Please, let us know what you thought to Ben and Mercy’s story in the comments box.

Meanwhile, share this article to help us brighten someone else’s day.