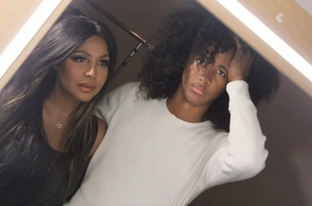 Toni Braxton is a proud mama of two boys and she’s not afraid to hide it. In a recent Instagram video, the legendary R&B singer recorded herself with her younger son,

Diezel Ky Braxton-Lewis, as they prepared for their journey to Howard University where she planned to drop Diezel off for his sophomore year of college. Shortly after, the two exited what looked like an elevator and faced a full-body mirror where Toni began singing her 2002 single “Hit the Freeway” in front of her reflection as Diez stood in front of his mama and flexed his arm muscles.

“Sophomore @diezel.braxton is hittin’ the freeway on his way back to HU.. you know!” Toni captioned her video.

Fans couldn’t help but to comment on how big the singer’s son had gotten along with how much he resembles his father, singer Keri Lewis.

“I remember when he was your size on the show. Where does time go?”

“Toni did a d–n good job with her kids.”

Diezel has overcome a lot of obstacles with Toni supporting him along the way. When the aspiring actor/model was just three years old he was diagnosed with autism and placed “on the spectrum.” Toni has publicly spoken out about his past developmental disorder and indicated in 2016 that her son was “cured” of autism, a claim that received major backlash from the public.

However, Diezel’s diagnosis still didn’t manage to hold him down; in 2021 he graduated Fusion Academy High School and revealed he would be attending Howard University.