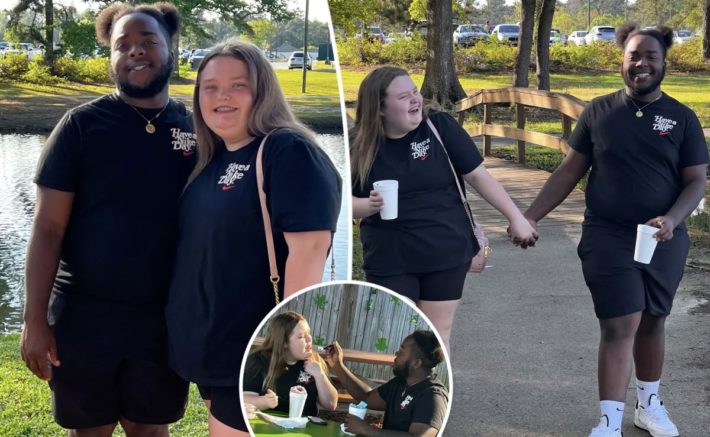 Alana “Honey Boo Boo” Thompson sat down with Entertainment Tonight to discuss her up coming weight-loss surgery, as well as defended her relationship.

The former “Toddlers & Tiaras” star, 16, said in a new interview that she and Carswell, 21, have received backlash for two things: “our age gap” and “because he’s black and I’m white.”

“I don’t care because, like, at the end of the day, my sister approves, his mom approves and we’re happy, so what fans got to say or what haters got to say, I don’t really care,” Thompson told “Entertainment Tonight” Thursday.

“She’s not getting married, she’s not having a kid, she’s doing very good in school,” Shannon, 22, said, adding that despite their age difference, Thompson and Carswell are “on the same wavelength.”

The “Here Comes Honey Boo Boo” alum and Carswell have been dating since mid-2021 but did not go Instagram-official until the end of September.

The two sparked engagement rumors when Thompson was photographed wearing a diamond ring in June, but her rep shut down the speculation, telling Page Six it was “just a ring.”

Thompson’s mother, “Mama” June Shannon, has also defended her daughter, saying the teen is old enough to make her own decisions.

“She is getting a lot of hate because she’s in an interracial relationship [and] he is older,” the “Mama June: Road to Redemption” star, 42, told TooFab in May. “At the end of the day, Alana’s not that 6-, 7-year-old child y’all fell in love with 11 years ago.

“Alana has grown up, she’s graduating high school next year, guys! People need to realize that she’s going to be 17 in August.”

Alana and her beau most recently made headlines when she announced their plans to travel to New York City in August to undergo a $13,000 weight-loss surgery.