Identical twin sisters give birth to boys in the same hospital, on same day – only hours apart 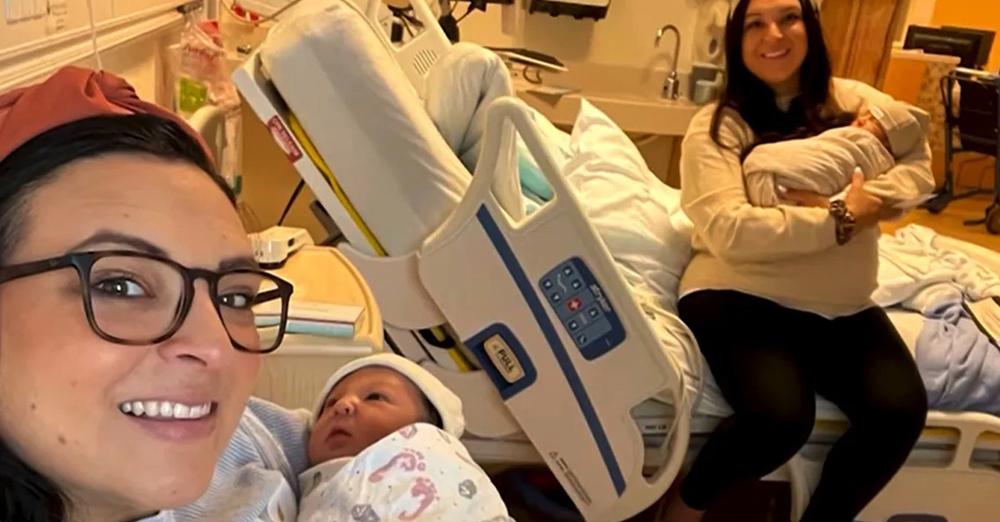 Becoming an aunt or uncle to your niece or nephew is a very special moment in anyone’s life. It is made even sweeter if you have a little one who can now have a playmate.

But for these identical twin sisters, their children were not just getting an age-mate but a near twin of their own!

Timber the wobbly dog
source: Camila | Newsflare/Tillstånd
Share
03:03
Jill Justiniani and Erin Cheplak are identical twin sisters based in Yorba Linda, California. The sisters have done everything together for as long as they can remember.

Now, they gave birth on the same day too. Justiniani and Cheplak both had their sons, Oliver and Silas, in the same hospital on the same day. And apart from that, both boys had the same measurements, weighing 7 pounds and 3 ounces each, as well as measuring 20 inches in length at birth.

“The twinning continues,” Erin Cheplak’s said to the media. Erin’s husband Zach is also one-half of a fraternal twin as well. Erin and Zach got married during the pandemic in an intimate ceremony and held a larger reception in August 2021 to celebrate.

On the morning of their August 2021 reception, she got a call from her sister, who surprised her with the news of her pregnancy. Jill Justiniani was pregnant with her first child with her husband Ian Justiniani. The two had been married since 2019.

“I screamed and woke up my husband,” Erin Cheplak shared with the media. “It was such an exciting time,” she added.

A week later, while honeymooning in the Maldives, the Cheplaks found out they were pregnant and made their own phone call to relay the good news.

Erin Cheplak shared her experience. She said, “I took the pregnancy test and saw the two lines and it was very faint. I was second-guessing, am I seeing what I’m seeing, and I FaceTimed Jill from the Maldives and she was like, ‘Yes, that’s it. That’s it.’”

The twin sisters, who had been incredibly close to one another their entire lives andwere thrilled to be able to embark on the journey towards motherhood with each other as well. They said that the fears, unknowns, and anxieties a mom-to-be goes through were made easier as the sisters could talk to one another and help each other out.

The sisters lived just 45 minutes from one another and shared that their husbands had a running joke that both of the men mentioned time and again during their pregnancies. The two men believed they would give birth on the same day but it seemed unlikely from what doctors told them.

Jill Justiniani was scheduled for a C-Section on May 5th, while Erin Cheplak was due on the 15th of May. But on the morning of May 5th, Erin woke up with something going on with her stomach which she assumed was her nerves reacting to her worry about her sister’s C-section later that day.

But it turned out it was not just nerves for her sister but her own water had broke. She called her husband and then quickly made her way to the hospital as she prepared for birth.

The Cheplaks and Justinianis were all at the same hospital, alternating between each other’s rooms to keep everyone in good spirits as the women waited for their babies to be born.

Later Jill Justiniani shared that she could not believe this was happening since the odds were so little. “We’ve just been so close and so inseparable, it made complete sense in a very odd way,” she said.

w live only 5 minutes from one another. They said they are grateful for being able to experience motherhood together.

The twins who share the same career as pediatric occupational therapists are even closer because they lost a sister 10 years ago and feel the family they have now left, is the family they cherish all the more.

This is such a lovely story of twin sisters being able to lean on one another during a magical time in their lives.

Share this sweet story with your family and friends and make their day!