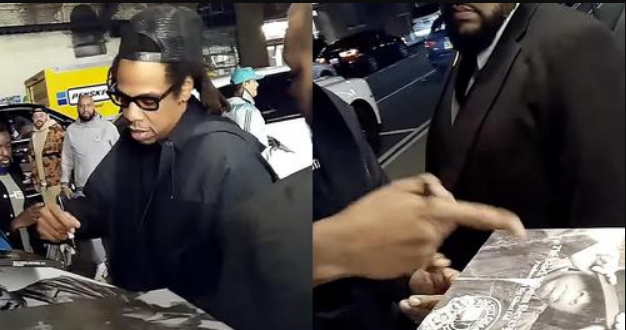 Jay-Z recently shut down a fan’s plans to get their bootleg vinyl version of his The Black Album signed after Hov spotted the fake and refused to put his John Hancock on the cover.

On Wednesday (Dec. 14), The Hollywood Fix shared video of autograph hounds recently running up on Jay-Z while he was leaving his New York City office. Apparently, Hov has agreed to sign autographs for the persistent group once a week. In the video, several people approach him with outstretched records to sign. After a brief chat, Hov obliges the crowd and begins to autograph their items.

Jay-Z goes down the line signing several things before warning that he is only doing two more. However, when he gets to the last person in the line, he quickly notices the vinyl record they are holding is not an official release.

“That one ain’t even real,” Jay-Z scoffs before walking off.

The record Hov refused to autograph is The Black Album Revisited produced by lauded underground beat maker Big Ghost Ltd, which dropped in 2018 and features The Black Album vocals over new production from BG.

This isn’t the first time Jay has refused to sign a fan item. Last summer, she was approached by a throng of autograph-seeking fans outside a building in New York City and turned down a woman’s attempt to get a baseball signed.

“I don’t play baseball,” Jigga told the woman before walking off.