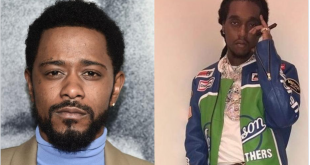 The Hip Hop community has been under attack as of late, whether with some rappers’ unfortunate demise, to the judicial system’s attempts to use lyrical content against the artists. And while some are using their voices and platforms to take a stand against the apparent dark cloud over the Hip Hop community, others are calling for a different type of change. Folks like actor LaKeith Stanfield are calling for an end to one of its infamous subgenres altogether: “Gangsta rap.”

Hip Hop is all around us. The still-growing and ever-popular genre of music was credited to have begun in the early 70s in the Bronx, NY. Writer Sean Collum wrote an extensive piece on its history for The Kennedy Center, providing much education on one of music’s most exciting genres.  Throughout the piece Collum discussed the six elements of hip hop back in the 70s, which included DJing, MCing (rapper), Breaking (dance form), Writing, Theater and Literature, and knowledge of self.

By the 1980s, more emcees, DJs, and personalities began to arise as the genre grew more and more. Even dance became an integral aspect of the culture, enhancing and opening more doors for its popularity. Rappers like LL Cool J, Slick Rick, Doug E. Fresh, Big Daddy Kane, Salt-N-Pepa, MC Lyte, Queen Latifah, and more entered the scene and kept the party going. Lyrics were mostly centered around having a great time while speaking on things the artists experienced while growing up in the inner cities.

Things would only increase in the 90s. The rappers mentioned above continued their reign as new acts also bombarded the scene. Enter acts like Snoop Dogg, Nas, Jay-Z, Missy Elliot, Lil’ Kim, Tupac Shakur, The Notorious B.I.G., and many more game-changing artists. But within the excitement and joy that Hip Hop brought to many came criticisms for some of its violent content and nature.

According to an article written in About.com, Gangster rap, or “Gangsta rap,” originated in the 80s from artists speaking on experiences with gangs, violence, and more. However, many artists have argued over the years that although the music may be violent, offensive to many, or intimidating to specific audiences, their lyrics are only a “depiction” and not a promotion of the lifestyle.

Currently, there’s a significant debate surrounding rap lyrics being used in the court system. For example, a CNN report states song lyrics were used in the indictment against rappers Young Thug and Gunna in their ongoing RICO case by a District Attorney in Atlanta. But artists such as Jay-Z, Meek Mill, Kelly Rowland, Fat Joe, and many others are joining together to fight against these actions by those in the judicial system.

However, Atlanta actor LaKeith Stanfield (who has a bourgeoning music career under the artist name HTIEKAL – his name backward) states that gangsta rap should altogether be abolished. In an Instagram post, the actor stated, those who are fans of the subgenre “can’t also be for Black [people].” Furthermore, the actor speaks of the dangerous toxicity associated with it. As the post continued, Stanfield encouraged people to “make it cool to embrace life, travel, and learn new things!”

Lakeith Stanfield received a lot of praise for his opinion on the state of hip hop. Many fans echoed his sentiments glad that someone finally said what others have been thinking.