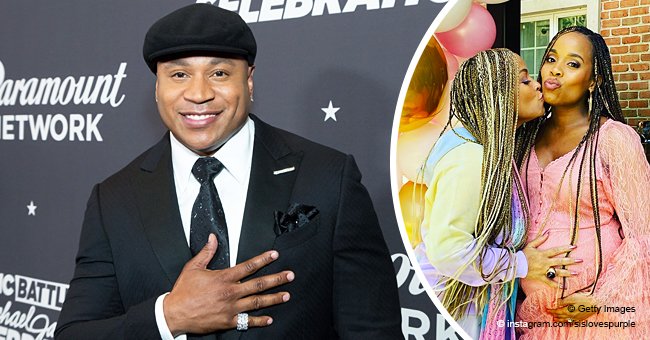 LL Cool J and his wife Simone Smith are about to be grandparents for the second time and they are not afraid to let the world in on their joy.

On Monday, the waiting grandmother shared a heartwarming photo of her and pregnant daughter Italia Anita during what seemed like a gender reveal/ baby shower party.

Italia glowed in a simple pink lace dress with ruffled sleeves as she posed for the camera while her mom planted a sweet kiss on her cheeks and cradled her burgeoning baby bump.

Back in 2018, LL Cool J and Simone made headlines when they threw a lavish Moroccan-themed baby shower for Italia’s first pregnancy.

Simone looked youthful in a rainbow-colored outfit which she paired with a matching scarf. Her blonde braids adorned her face as she doted on her daughter and unborn grandchild.

The mother-daughter duo posed in front of a brick wall decorated with pink, white, and gold balloons, and a drink cart by the side. In the accompanying caption, Simone gushed about the family’s soon-to-be addition,

“Ma’s girl is having a baby girl!!! She’s the only one that calls me Ma. My other babies call me mommy, and my grandson King-James calls me Mo-Ma.”

The excitement of welcoming a granddaughter rang through the comments sections with several fans congratulating Simone and Italia on the great news. One fan wrote:

“That little girl is going to have you all wrapped around her little fingers. Good thing, she’ll have 10 of them.”

Fans may recall that back in 2018, LL Cool J and Simone made headlines when they threw a lavish Moroccan-themed baby shower for Italia’s first pregnancy with son, King-James.

The proud father shared photos of the ceremony and the brood was seen dressed in native attires while declaring his joy at being a grandfather for the first time.

The bundle of joy will be joining the large family of the renowned rapper and actor. LL Cool J, whose birth name is James Todd Smith, is a proud father of four, all of whom he welcomed with Simone.

The couple has one son, Najee Laurent Todd, and three daughters, Nina Simone, Samaria Leah, and Italia Anita. Simone and LL Cool J’s thriving marriage goes way back to 1987 when they were still teenagers.

The lovebirds dated for eight years and tied the knot in 1995. Like most couples, the duo has had their fair share of trials, as Simone battled bone cancer in 2004.

However, their love conquered it with LL Cool J having her back and even offering to give her his fibula. Luckily, after several surgeries and two-and-a-half years of recovery, Simone was declared cancer-free.

Although LL Cool J currently stars in the criminal series, “NCIS: Los Angeles,” as Sam Hanna, his successful career began with music in 1984 under the record label, Def Jam. His music career saw him bag two Grammy Awards for “Mama Siad Knock You Out” (1990) and “Hey Lover.”