”Me and my precious Mother hung clothes out to dry on a line just like this. 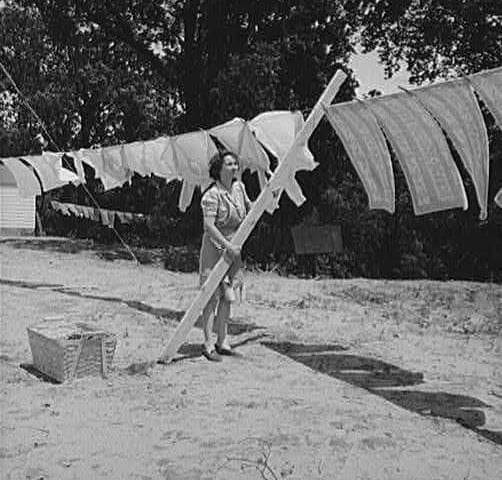 My mom was an early environmentalist, and she didn’t even know it.

One of my fondest childhood memories involves my mother and the clothesline that stretched across our back yard.

Twice a week, she’d grab her bucket full of clothespins and lug a wicker basket full of wet clothes up the basement stairs and out into the sunshine. Only on winter’s coldest days would she use the electric dryer.

Often, I helped, handing her one soggy item after another so she could peg faster. Then she’d hook the line with the wired pole and hoist it high into the air to keep the sheets off the ground.

Many hours of my youth were spent perched on a branch in the nearby apple tree, reading books high above the sails of those billowing sheets.

Oh, the fragrance of those sun-dried clothes. Talk about a memory that hinges deep sighs to your smile.

There’s an eco-friendly movement underfoot to get more Americans to hang clothes outside to dry. As with any attempt to save the environment, there are opponents. In this case, they tend to be people who move to exurbia to escape all they claim is wrong with modern America but then oppose this throwback to the good ol’ days.

The New York Times reported last week that clothesline bans are most prevalent among this country’s 60 million community and homeowner associations, whose collective mission revolves around mandatory blandness.

Most of them forbid outdoor clotheslines. Many won’t even allow residents to throw a wet beach towel over a railing.

A clothesline devalues property values, they say. Makes it look like you have neighbors who are too poor to own dryers.

There also appears to be an obsession with other people’s underwear. One article after another quotes indignant Americans huffing and puffing over the possible horror of seeing grandma’s waist-highs flapping in the breeze.

The Times reported that Colorado, Hawaii, Maine and Vermont passed laws last year to allow outdoor clotheslines. Florida and Utah already had such laws, and Maryland, North Carolina, Oregon and Virginia are considering them.

Here’s why: Dryers suck up a lot of the country’s electricity.

The Department of Energy reported in 2001 that electric clothes dryers account for nearly 6 percent of total electricity use in American homes. This does not even count electricity to power gas-heated dryers.

When you consider that all indoor and outdoor lighting constitutes only 8.8 percent of our collective total usage, you get an idea of just how much energy we’re using to do what the sun does for free.

Next May, filmmaker Steven Lake will release a pro-clothesline documentary titled, “Drying for Freedom.” In the meantime, Project Laundry List’s Web site (laundrylist.org) offers stats and helpful tips to persuade more Americans to hoist up their own laundry:

Snap the clothes before hanging to minimize wrinkles. In frigid weather, hang the clothes inside to humidify the heated air. Pop stiff jeans and towels in the dryer for just a few minutes and set to “air.”

Goodness, I’m starting to sound like quite the happy homemaker. Which brings me to one of the questions answered by Project Laundry List:

“Can feminists hang their clothes?”

Why, what better way to unwind after a long day of emasculating the menfolk?

Oh, how I enjoy those stereotypes.

“Laundry, liturgy and women’s work all serve to ground us in the world, and they need not grind us down. Our daily tasks, whether we perceive them as drudgery or essential, life-supporting work, do not define who we are as women or as human beings.”

Now, I love Norris’ work, and I really appreciate her mystical take on all of our womanly tending. In this feminist’s home, there’s only one rule for any interloper who thinks he’s going to touch the laundry: Step Away From the Piles.

Like so many other feminists, I wash, I dry, I fluff and I iron.