Pope Benedict XVI has died at the age of 95 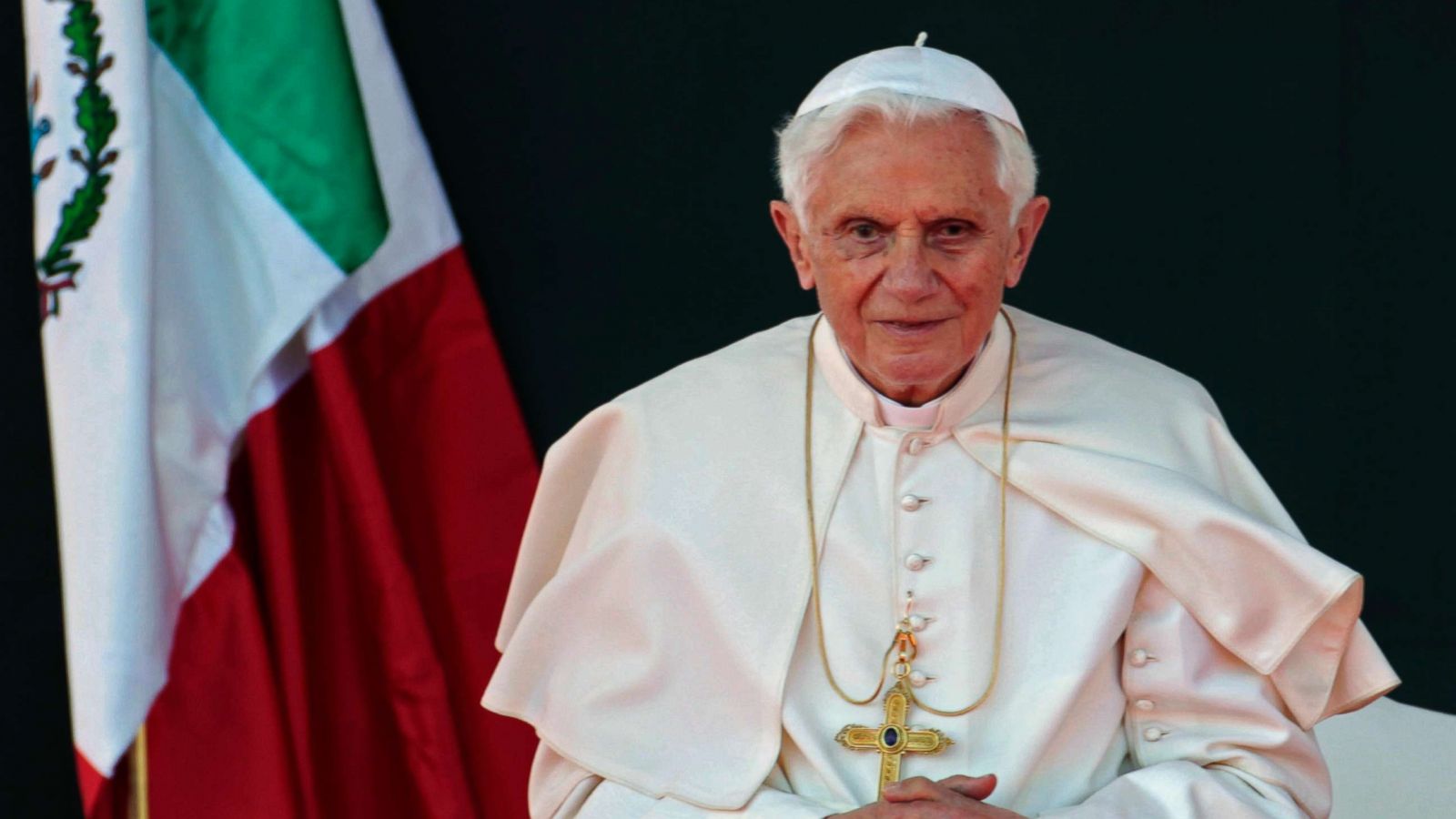 Pope Emeritus Benedict XVI has died at his home in the Vatican at 95, Vatican officials announced.

“With sorrow I inform you that the Pope Emeritus, Benedict XVI, passed away today at 9:34 in the Ecclesiae Monastery in the Vatican. Further information will be provided as soon as possible,” said the Director of the Holy See press office Matteo Bruni’s statement.

The Vatican press office has said that Pope Emeritus Benedict XVI’s body will lie in state in St. Peter’s Basilica in the Vatican from Monday through Wednesday for the faithful to pay their respects.

After his surprise resignation in February 2013 at the age of 85, Benedict was only known to have left the tiny sovereign state briefly and was rarely seen in public. 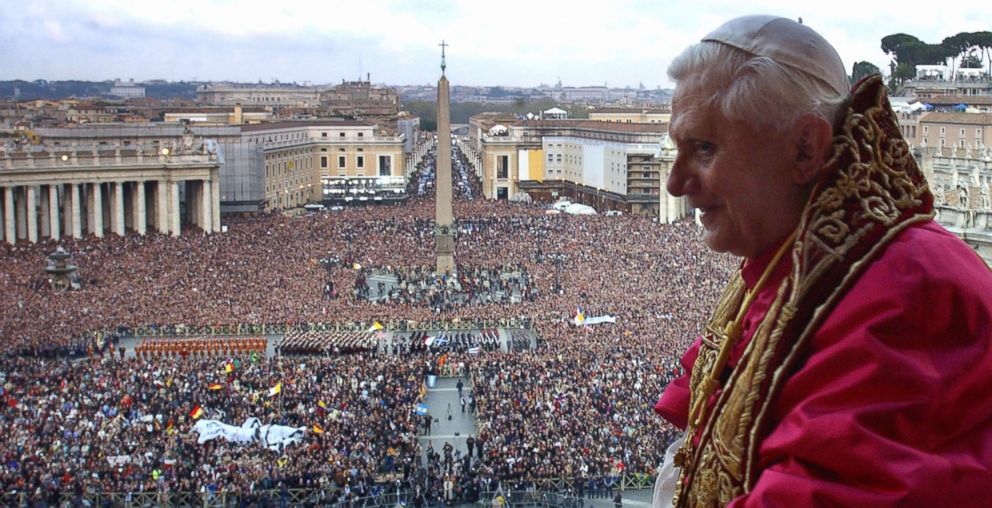 Pope Benedict XVI, Cardinal Joseph Ratzinger of Germany, appears on the balcony of St Peter’s Basilica in the Vatican after being elected by the conclave of cardinals, April 19, 2005, Vatican City, Vatican.

Cardinal Joseph Ratzinger was named the 265th pontiff of the Roman Catholic Church on April 19, 2005, at the age of 78, and chose the name of Benedict XVI. He was the first German pope in several centuries, the second consecutive non-Italian pope and the oldest pope elected since Clement XII in 1730, according to church records.

He was elected in four ballots, which is considered relatively quick for the Church.

During his nearly eight years as pope, the Catholic Church was the subject of several major scandals. A growing number of sexual abuse cases involving the clergy was perhaps the most damaging and revealed a repeat-pattern of how the church had dealt with these cases in the past; leaving the abusers and their superiors, who covered up for them, to go unpunished by law enforcement.

Some Vatican watchers considered the revelations to be the greatest crisis the church has faced since the Reformation. First as cardinal in his doctrinal post in the Vatican and later as Pope, Benedict acted to develop a unified church response to stop this increasingly public clerical sex abuse crisis.

He angered some Muslims with his 2006 speech in Regensburg, Germany, which was interpreted by some as anti-Islam. Afterwards, he worked to build more bridges between the two faiths. 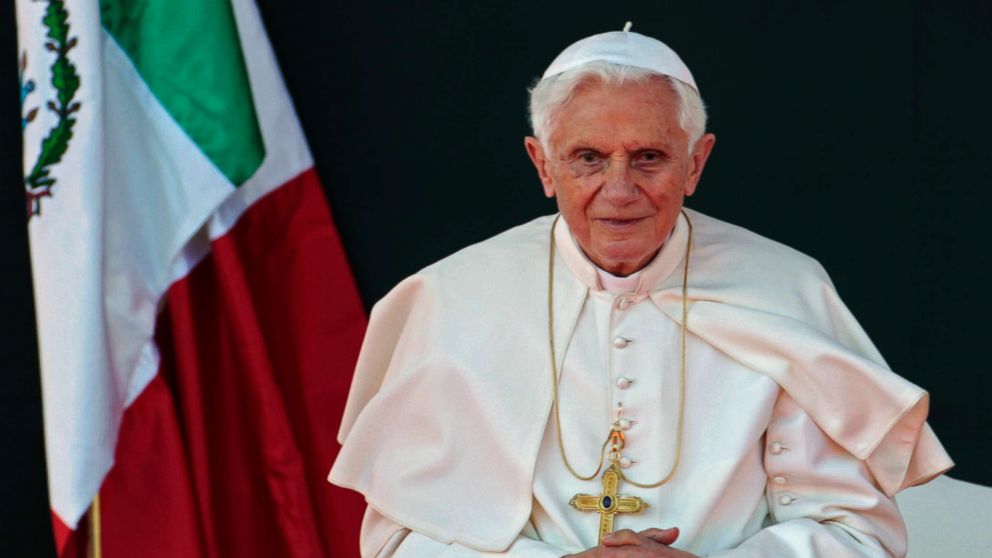 Pope Benedict XVI listens to a speech during his welcome ceremony at the airport in Silao, Mexico, March 23, 2012.

Many Catholics loved and respected him until his death. His successor, Pope Francis, frequently spoke fondly of him and during his trip to Malta in April 2022 described him as a “prophet” for predicting that the Catholic church of the future would become “smaller” but more “spiritual, poorer and less political.”

Benedict’s snow-white hair, soft-spoken manner and love for cats and classical music — especially piano — helped endear him to many.

Although his papacy was relatively brief, Pope Benedict XVI made 24 foreign trips visiting every habitable continent. His first visit was in August 2005 to Cologne, in his native Germany, for the Church’s 20th World Youth Day. He made a trip to the U.S. in 2008, during which he delivered a speech to the U.N. General Assembly.

A prolific writer throughout his life, he penned speeches, encyclicals, exhortations and a three-book biography, “Jesus of Nazareth,” while pope.

He beatified 322 people and canonized 45, including two Americans: Kateri Tekakwitha, the first Native American saint, and Marianne Cope, who spent the last 30 years of her life ministering to the sick on the Hawaiian island of Molokai.

Joseph Ratzinger was born in Marktl am Inn, part of Germany’s southern region, on April 16, 1927. His father was a policeman and his mother was a former cook. He had a brother and sister.

He followed his older brother, Georg, into the seminary in 1939 at the age of 12, per his autobiography. When he was 14, Ratzinger was enrolled in Hitler’s Nazi youth movement; at the time, membership was compulsory. In 1943 he was drafted into a Nazi anti-aircraft unit, but his unit never saw combat.

At the end of WWII, in April 1945, he deserted and returned home. He was sent to a U.S. prisoner of war camp in May 1945, as a former soldier, but was released after a few months.

Following the war, which ended when he was 18, the two brothers returned to the seminary. Joseph and Georg were ordained priests and celebrated their first mass on June 29, 1951. 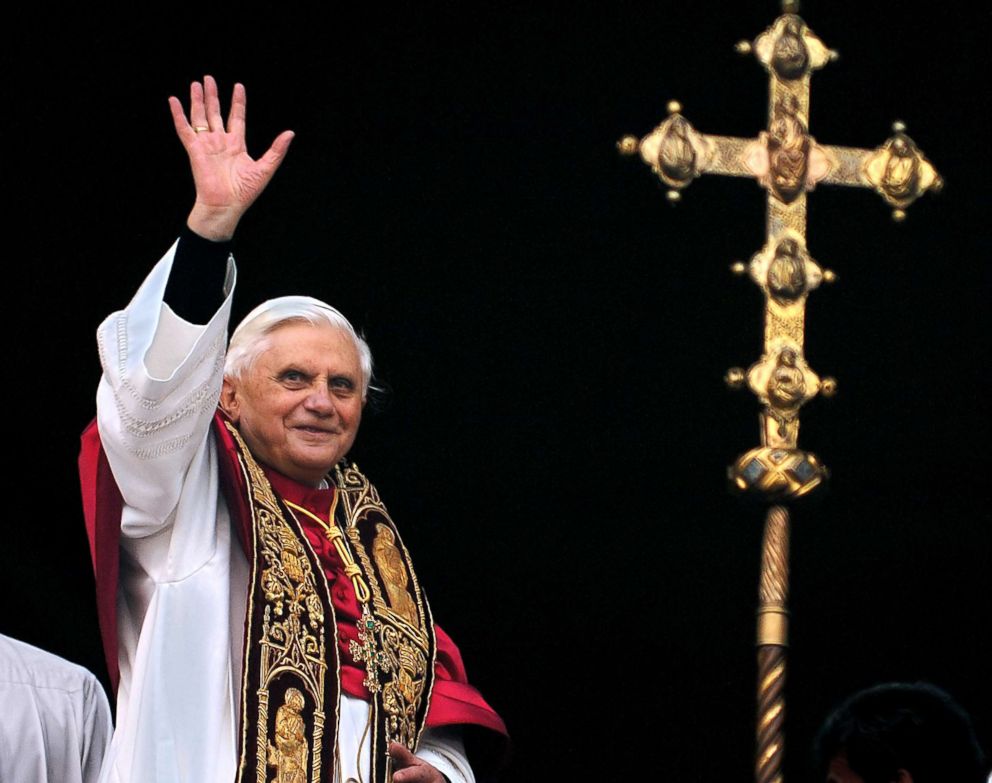 Pope Benedict XVI greets the crowd from the central balcony of St. Peter’s Basilica at the Vatican, April 19, 2005, soon after his election.

After being ordained, Ratzinger pursued a successful university career teaching a dogmatic and fundamental theology at a number of German universities. In 1977, Ratzinger was appointed archbishop of Munich and Freising. Three months later, he was elevated to cardinal by Pope Paul VI.

Three years after his election, Pope John Paul II called Cardinal Ratzinger to Rome to head the Congregation for the Doctrine of the Faith at the Vatican, in charge of all the Church’s doctrinal matters.

As John Paul II’s health declined, Ratzinger took on a more important role at the Vatican and in 2002, he became dean of the College of Cardinals. As dean, he had an important role in the period between the death of John Paul II and the election of the new pope, which included summoning the conclave to elect the new pope.

His long service to Pope John Paul II in the Vatican meant he was known and respected by most of the cardinals who elected him. His stature grew after he presided over John Paul’s funeral Mass in St. Peter’s Square.

Electing Benedict, the cardinals hoped he would clean up the church — which was still in the throes of the clerical sex abuse scandals — because of his deep knowledge of its workings after twenty-four years at his job at the Vatican, alongside his predecessor.

Pope Benedict’s surprise retirement announcement was delivered in Latin to a roomful of cardinals in the Vatican on Feb. 11, 2013. With his retirement, many Vatican watchers suddenly saw him in a modern and revolutionary light, no longer a “conservative,” which is how he had been mostly labeled throughout his pontificate.

He was succeeded by Pope Francis, from Argentina, who was elected on March 13, 2013.

Only six other popes are believed to have resigned in 2,000 years of church history; the more recent was Gregory XII in 1415. Some speculated that scandals had led Benedict to resign, but he said in a 2016 interview it was his “duty” because his health was declining and he couldn’t keep up with the travel demanded in the job.

Although frail in his later years, Benedict continued to write, read, pray and take walks in the Vatican gardens, according to Vatican officials. He also had occasional visits from Pope Francis, cardinals, his brother and friends.

In 2020, at the age of 93, when already frail, Benedict returned to Bavaria, Germany for four days to visit Georg, who was seriously ill, and with whom he had been very close throughout his life. It was the first time since his resignation, more than seven years earlier, that Benedict was known to have left his residence at the Vatican — and Italy.

In 2022, the infirm, retired pope asked forgiveness in a written statement for any “grievous faults” in his past handling of sex abuse cases in the church but denied any personal or specific wrongdoing. He was responding to a German independent report on clerical sex abuse, issued in January of the same year, which had criticized how Benedict had dealt with four cases while he was archbishop of Munich, Germany from 1977 to 1982.

Victim groups and some experts said the report’s findings had tarnished the former pope’s legacy as one of the most renowned Catholic theologians, while other conservative supporters, critical of the present pope’s style, defended his actions.

Giovanna Chirri, the Vatican reporter, who scored a worldwide scoop as she immediately understood the Latin of Benedict’s surprise announcement, told ABC News “he was not very understood as pope and was a victim of rather radicalized prejudices which made him disliked by many.”

However, she added, “people’s perception of him changed with his resignation and his symbolic and dramatic temporary departure by helicopter from the Vatican on Feb. 28, 2013, the day of his resignation.”

The scene was broadcast live to millions around the world.