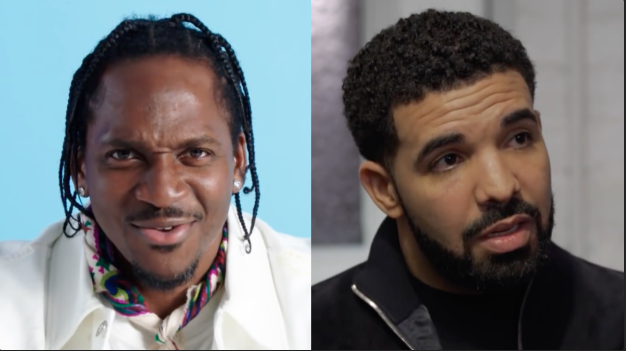 Pusha T believes his diss song “still burns” Drake to this day, despite being released over four years ago.

During a recent interview with XXL, the Virginia rapper revisited his war of words with Drizzy and claimed his rival is still reeling from “The Story of Adidon” based on the amount of subliminal shots he’s fired back since then.

“Every time I hear a subliminal in one of his songs, it just lets me know how deep it hurt him,” he said. “Because it’s been four years now. And we still talking about it. He is. I don’t. I’m cool. But every time it’s a subliminal, I’m like, yes. It burns. It still burns. It lets me know. I love it.”

When asked if he thinks Drake will ever directly diss him, Push replied: “We should see. I don’t know what he’ll do. At this point, that’s contradictory. Would he jump out the window? And he wanna say I took it too far? Then he gon’ tell people. Tell the label. Tell J. Prince. My God. It’s a lot.”

He added: “With all of that being said, it’s like I’m not interested anymore. I’m just really not.”

Released in May 2018, “The Story of Adidon” found Pusha T accusing Drake of “hiding” his son, Adonis — whose existence had yet to be made public — while taking aim at the OVO hitmaker over JAY-Z’s “The Story of O.J.” According to Push, his source was Drizzy’s longtime producer Noah “40” Shebib.

“The information came from 40. It didn’t come from Kanye, at all,” he said on The Joe Budden Podcast in 2018. “40 is sleeping with a woman who he talks to five, six hours a day, provides opportunity for her and ultimately speaks about how he’s disgruntled about certain things, notoriety and things involving Drake and his career.”

“The Story of Adidon” followed Pusha T’s previous diss song “Infrared,” taken from his 2018 album DAYTONA. Drake quickly fired back with “Duppy Freestyle,” which was accompanied by a $100,000 invoice to G.O.O.D. Music and Def Jam for “promotional assistance and career reviving.”

Drake most recently appeared to take shots at Pusha T on Jack Harlow‘s “Churchill Downs” earlier this year, rapping: “My urges for revenge are uncontrollable / I know we’re gettin’ older though, yeah / But I gotta get a n-gga back for that / It’s non-negotiable, it’s not even debatable.”

Pusha T addressed the lyrics in an interview with The Breakfast Club, but dismissed them as being unworthy of a response.

“I even heard that and it sounds old to me. Like, the flows sound old,” he said. “And then it’s like, even what is considered, like, the shots. It’s like, bro, after what I’ve done, like ‘the middleman’ talk and all that type of talk — that’s not scathing for me. I’m here to, like, burn down everything.”