Regina Hall Addresses Rumors That She Dated Chadwick Boseman: ‘There’s One That I Would Clear Up’ 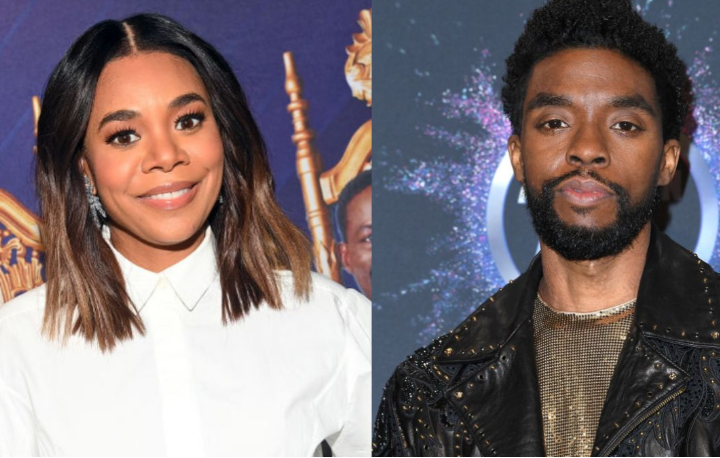 Regina Hall set the record straight on a rumor she once dated Chadwick Boseman.

But despite living in the public eye, the Honk for Jesus. Save Your Soul actress prides herself on keeping her personal life to herself.

Unlike many celebrities today, Hall isn’t on social media and rarely addresses rumors made about her. However, during a recent interview with The Breakfast Club, the Girls Trip actress set the record straight on a rumor involving her and late actor.

In 2018, rumors swirled that Regina Hall was dating Chadwick Boseman.
During her interview, Hall addressed the time she and Chadwick Boseman sparked dating rumors after they were spotted leaving the 2018 Vanity Fair post-Oscar celebration together.

“I don’t even address stuff, especially dating stuff I don’t address it, but there’s one that I would clear up, and I only clear it up because it was untrue and because he’s not here and that was like Chadwick Boseman,” she said.

According to sources, the actors were seen walking out of the event next to each other. It wasn’t long before photos of the two together began circulating online, sparking spark dating allegations.

According to sources, the actors were seen walking out of the event next to each other.
It wasn’t long before photos of the two together began circulating online, sparking spark dating allegations.

Hall such down these dating rumors, pointing out that Boseman’s wife was with them.

Though she didn’t address these rumors in 2018, Hall set the record straight on her relationship with him during her interview with ‘The Breakfast Club.’
The actress shared that though she and Boseman were walking out of the party next to each, the Black Panther star’s wife Taylor Simone Ledward, who was his fiancée at the time, was just a few steps behind them.

“I ran into him at a Vanity Fair party and people assumed we dated and his fiancée was right behind us and they got married,” Hall shared. “They’re married and he was never inappropriate.”
She continued, “I just think sometimes for women, I just always want them to know that’s not my get down or even the man’s!”