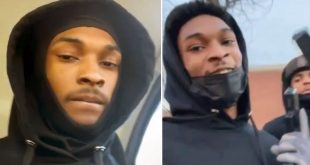 An aspiring drill rapper was gunned down in an alleyway on Chicago’s South Side Thursday.

The 18-year-old gang banger, known online as Lil Tae, had just live-streamed an Instagram video about an hour before he was killed.

He was standing in an alley in rival gang territory when he was shot and killed.

Lil Tae, also known as Lil Empty the Clip, had a habit of going live in gang territory while taunting his enemies to catch him.

According to the Chicago Sun-Times, the teenager was shot multiple times in the face and chest on the 800 block of East 62nd Street about 3:30 p.m.

He was transported to the University of Chicago Medical Center, where he was pronounced dead.

A street view of the alley in gang territory where Lil Tae lost his life on Thursday.

Lil Tae gained a reputation as a “shooter” who is rumored to have killed at least 5 people before he turned 18.

His reputation made him popular with the ladies. Fans paid tribute to him in posts on social media on Thursday.

No arrests have been made.