Russell Wilson Proposes To Ciara Again, Asks For More Babies: ‘Just Give Me One More’ – Video 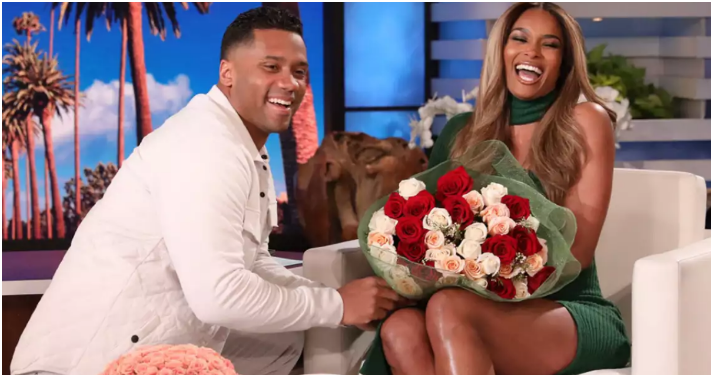 Are Ciara and Russell Wilson seeing more children in their futures? The Grammy-winning artist, 36, guest hosted The Ellen DeGeneres Show on Thursday and was joined by her husband for the special occasion. During the show, the Seahawks quarterback, 33, surprised the “Level Up” singer with an unexpected proposal, asking his wife if she wanted to have another baby.

aaaaaaaaa
The sweet moment happened after Ciara joked to the audience that her husband makes her extremely nervous, blushing after he gave her a large bouquet of roses.

The NFL star laughed and asked the audience, “Do you guys want me to make her more nervous?” as Ciara looked surprised. Dropping to one knee, Wilson asked, “I have a question for you. Serious question. Can we have more babies?”

Ciara laughed as her husband said, “I mean, it would be perfect. Just give me one more at least.” Continuing to giggle, the “Body Party” singer replied, “We definitely can, but we’ve got a little time before we get there.”

Ciara added that though she has her hands full with their three kids at home, she loves seeing Wilson in “daddy mode,” explaining that it’s “one of the sexiest things” about him.

The couple, who have been married since 2016, recently spoke to PEOPLE about the “non-stop entertainment” with raising their children.

Ciara explained that they have a house packed with little comedians, saying, “These kids are funny. Our kids are really hilarious, and obviously the older they get, the more they think they know.” While the kids “run the house” at this point, the mom confessed that baby Win is the one “leading the charge” with his siblings.

“They say the third baby kind of moves or learns the quickest because they’re trying to keep up with their siblings, and he’s on it,” Ciara told PEOPLE earlier this week. “He’s talking really early, he’s moving, he’s a big baby and he’s really tall, you know?”

Wilson added that he’s “daddy monster most of the time,” and they couldn’t be loving their family life more. “It’s been so much fun,” Ciara gushed. “Honestly, it’s been a blessing. You know, we got triple the love now.”

Check out the sweet moment below.