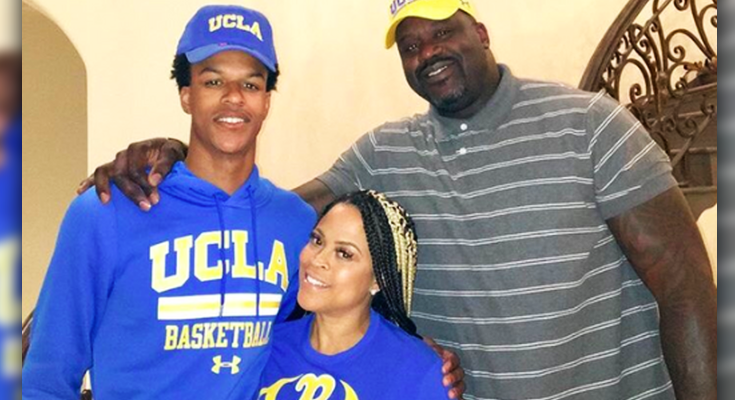 Heartbreaking news has struck the O’Neal family recently and our thoughts and prayers are definitely with them at this time.

NBA legend, Shaquille O’Neal and his ex-wife/Basketball Wives creator, Shaunie o’Neal, are deeply concerned about their 18 year old son, Shareef right about now. In case y’all hadn’t heard, Shareef was one of the most highly sought after high school basketball players during his senior season. There was major hype surrounding his upcoming college b-ball career with UCLA this year.

Unfortunately, the 18-year-old has just bravely announced that UCLA’s medical staff has caught a serious heart aliment and he must now undergo major heart surgery.

He credits the staff with ‘saving his life’ and spoke out during a new interview with TMZ to announce his plans going forward. He will have to sit out his entire freshman season and will be just a “normal student” during that time:

Shareef O’Neal- “So, the other day during a routine check-up…we found a medical issue dealing with my heart. … Thank God the UCLA medical staff found it early, but causing this, I will not be playing this season and I will be a medical red shirt.”

“During this time off, I’ll be off for a while, I’ll be focusing on academics, my health of course, and I’ll just be observing [the team] to be the best player I [can] be next year.”

Although Shareef says he understands that his heart surgery will require him to “be out for a couple of months,” he wants people to know this will not hinder his career:

“A lot of people are asking if this is career ending. Absolutely not, it’s just a little bump in the road and I’ll be back in no time. During my rehab, I’ll be attending my classes and being a normal student.”

He took a minute to thank his supporters and to give an honest view of how down this news has him at this time, but also how optimistic he is about his future:

“I’d like to thank UCLA, my family and my teammates and everyone who supports me in this decision. And I just want to say to all the kids [that] the road to success is not always gonna be a straight path. You know, you gotta go through some bumps and bruises.

“It’s not always gonna be easy. I’m a little down, feels like I was on my peak in basketball and going into my freshman year, coming out of a state championship at my high school. Felt like I was at the top of my game, just trying to get better, then this happened. So, I’m just doing my best to focus on my health right now.”

This has to be tough on Shareef and his family, but we definitely commend that young brotha for being able to hold his head high in the midst of this hardship. Looking forward to watching him soar to new heights after he bounces back from his heart surgery and sending positive energy his way.

See what else Shareef had to say in the video up top.