Single Mom Carries Disabled Son On Her Back All Around The World. Deserves A Medal. 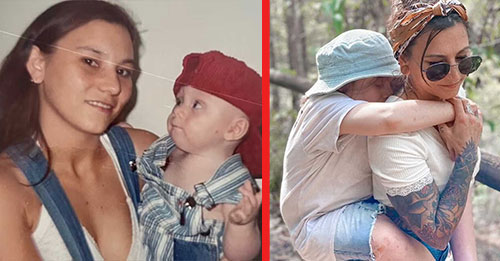 26-year-old Jimmy Antram has seen plenty of this globe but it has all been from the vantage point of his mother’s back.

Niki Antram has spent years travelling the globe with Jimmy clinging to her shoulders accomplishing a promise she made to herself as a 17-year-old first time mother to give her disabled son the finest life she probably could.

Niki had already scheduled their next adventure trip to Canada just when Covid hit and international borders shut. Niki, 43, is wary that she isn’t getting any younger and it’s getting more and more strenuous to carry Jimmy on her back during their trips to different parts of the world. Some incredible snapshots taken around the world show how Jimmy clinging on as they trek through mountains and rainforests.

Jimmy was born with physical and mental disabilities including blindness and requires round the clock care from his mother. Jimmy has a wheelchair but Niki has never quite liked using it. She is happy to carry him as long as she is physically able and helps him walk short distances on his own.

Niki shared that while planning long holidays, she always makes sure to have plenty of nappies, cloths, bed pads, sheets etc.  She plans a careful itinerary and calls ahead for every location she wants to visit irrespective of it being a restaurant, hotel or fearless adventure. She said that even if she knows that they will be okay but still like to apprise the companies to give them a heads up about them just to make sure they understand and are acceptable with having them there.

There has been a time when companies can’t accommodate and this is usually because of risks associated with Jimmy’s condition or logistical difficulties. Niki said that the exception to this was in Hawaii, where all of them wanted Jimmy to join. Niki have worked out how to piggyback Jimmy while pulling her suitcase and carry on through an airport until she gets a wheelchair to use until they board the plane.

Niki and her son enjoy the outdoors and she counts herself lucky that Jimmy has similar interests to her. Niki said that, with Jimmy, she look out ways to get him the best and most adventurous life and most of the time, it’s the simplest things that Jimmy loves the most.

The mother and son are based on the Sunshine Coast in their own little pocket of Queensland paradise. When they’re not travelling, they wake up in the morning and go for a bike ride. Jimmy in the trailer while his mother peddles for them both. The pair smile and wave as they pass their neighbours.

Niki’s schedule is draining but she is strong-minded to give Jimmy the best life she can deliver. Before their early outing, she’s already made breakfast, fed Jimmy, dressed him for the day and washed his sheets from the night before. She takes time each day to workout with Jimmy usually tagging along and sitting while she trains. Jimmy listens to the sounds around him if they’re training outdoors and playing with the sand during a beach session. Even when doing group fitness sessions at various venues throughout the Sunshine Coast, Jimmy will be in the thick of the action and listening to the workouts around him.

As a first time mother, Niki wasn’t completely awake of the landmarks he should have been hitting. Jimmy’s grandmother noticed that he wasn’t reaching for or directly looking at toys as they were dangling in front of him, prompting Niki to get further tests conducted.

Niki found out when Jimmy was about two months old that he was sightless. Six months after that, she learned Jimmy also had epilepsy but weaned him off the medication to treat it after years without any seizures.

Niki said that Jimmy is her encouragement and always want to see him happy and smiling. She knows that Jimmy cannot see her in a conventional way but Niki is certain that he has an image of what she look like in his mind. Every single day, Niki still tries to teach Jimmy new words and movements. It’s a process that needs to be repeated copious times to give him a chance to learn.

At times Niki asks herself that how can she be sad when she look at Jimmy who has never seen colours, clouds or rainbows and he is just sitting with a smile.

But Niki admits that she hasn’t always been so content. She says that her heart ‘broke’ the day she learned her son was permanently blind and it took a long time to overcome those feelings of hurt. Niki, being a young mother at 17, did not get that carefree life that most girls get at her age because she had responsibility of her son.

For their next trip, the duo has set their sights on seeing Australia.