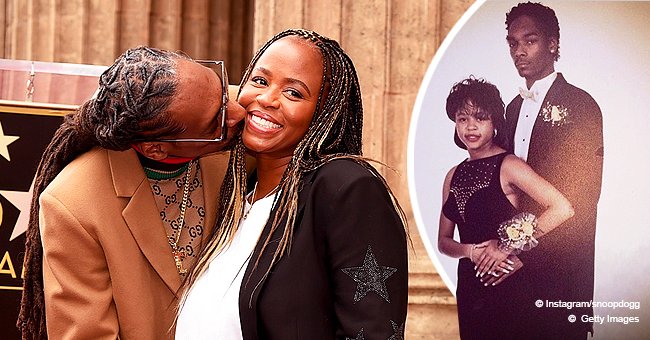 Congratulations are in order for rap icon Snoop Dogg and his business mogul wife, Shante Broadus, as they celebrate their 23rd year in marriage.

To commemorate their big day, the award-winning vocalist took to Instagram, where he shared a heartwarming throwback image of himself and Shante when they were yet youngsters.

In the past years, allegations of cheating have been levied against her spouse, but [Shante Broadus] always remained in good faith.

In another post, the “Gin & Juice” rapper shared a picture collage chronicling photos of him and Shante over the years. The post contained pictures of them from older times until the present.

The first snapshot was a beautiful scene from their wedding ceremony, which showed them all decked up in white and looking glamorous. Another of the pictures had the couple posing in all-black outfits.

The photo which came in the biggest frame showed Shante and Snoop Dogg locked in a warm embrace as he placed a kiss on her face.

Fans were super psyched in the comments as they joined in the celebration and cheered the power couple. With comments reaching up to over 7000, wellwishers showed their affection for the “Bible of Love” rapper and his longtime sweetheart.

Most hip-hop fans would reckon that it has been a rollercoaster of ups and downs in the marital life of Snoop Dogg. But one impressive aspect is that they continue to thrive and stay strong.

As reported by E!, the rapper, whose real name is Calvin Cordozar Broadus, and his partner, Shante, have been together since high school. They tied the knot in 1997 and went on to have three kids.

BDO reports that their union hit the rocks in 2004 when Snoop filed for divorce after citing irreconcilable differences. He and Shante, however, didn’t go through with the separation. Snoop once said during a revealing interview:

“I was trying to get a divorce, but I went back home, and I fell back in love with my wife and kids… I need my wife and my kids in my life — so I threw the papers away…”

The lovebirds renewed their vows in 2008 during a surprise party thrown on Charlie Wilson’s ranch. Shante Broadus is a successful businesswoman, but in her marriage, she had had to endure scandalous moments.

According to NickSwift, in the past years, allegations of cheating have been levied against her spouse, but the 48-year-old always remained in good faith.

A recent scandal cropped up after Instagram model Celina Powell alleged that she had an affair with Snoop Dogg and Shante responded with some cryptic messages on Instagram.

Madame Noire reports that Celina shared another scandalous news as she informed fans that she has graphic clips of her and Snoop Dogg up on the internet. Shante, in a mild Instagram post, poked fun at herself, a few days after.