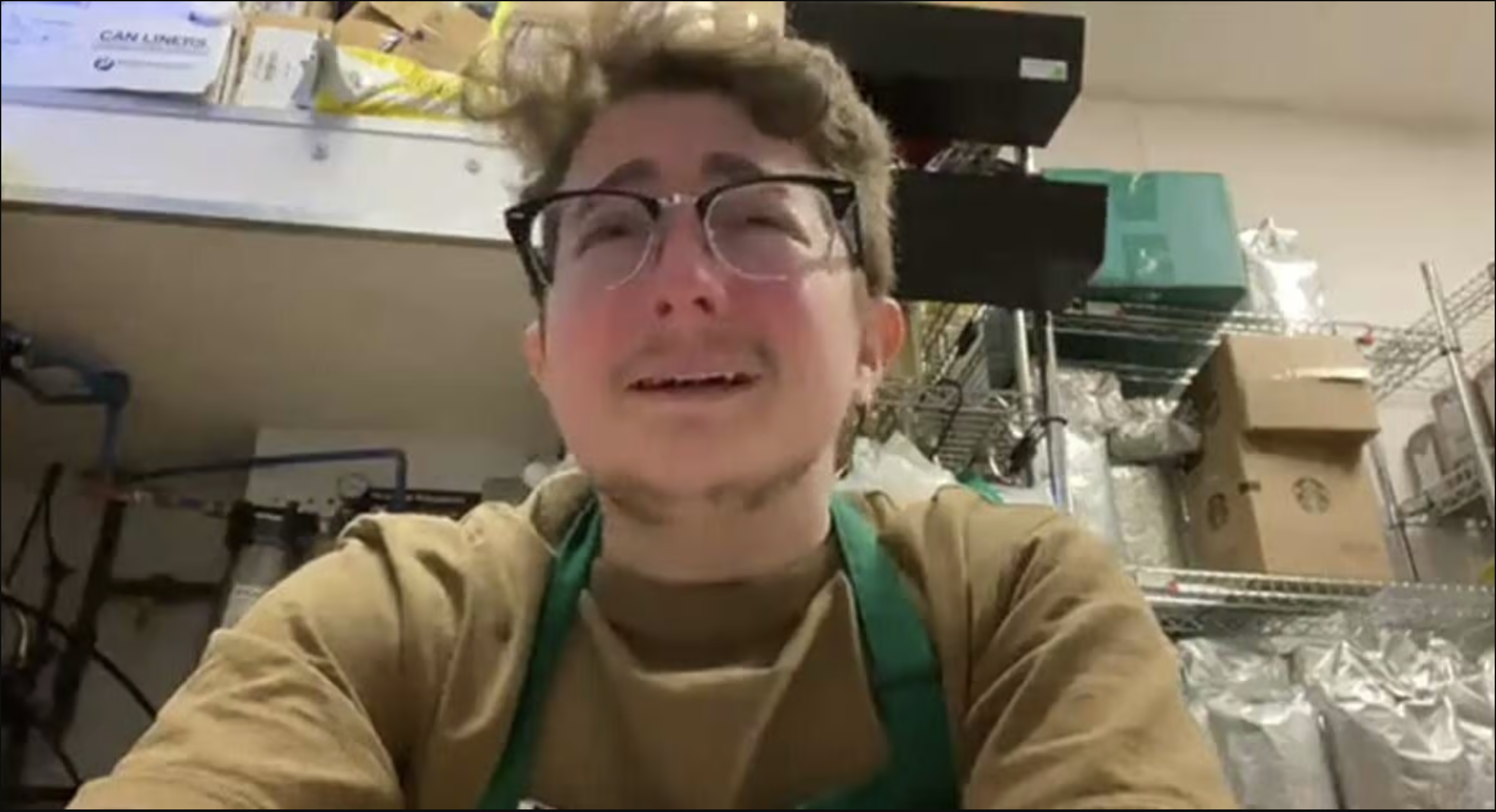 Recently a Starbucks barista tearfully shared their poor working conditions and long working hours schedule, and people on the internet have mixed opinions on her now-viral video.

The clip initially shared on Twitter showed the employee crying while they described the long, excruciating work hours, working conditions, and rude customers.

The video clip was shared on Twitter by far-right Donald Trump supporter Sebastian Gorka, and it has received a massive response from netizens ever since.

In the video, the coffeehouse Company worker explained that they were scheduled at work for 25 hours during the week and 8 hours on the weekends while being a full-time student.

“People wonder why we need a union at Starbucks,” the trans barista said in the viral video clip.

“I am literally about to quit. Like, I don’t know if I’m going to do it. But like I really want to, I almost walked out today. And I’m crying in the back room right now, I almost cried on the floor.”

The worker explained that they were a full-time student and had been working seven days a week and how it almost became impossible for them to manage everything due to the heavy workload.

“I’m a full-time student, I get scheduled for 25 hours a week. And then on weekends, they scheduled me the entire day, open to close, that one’s scheduled for eight and half hours, both Saturday and Sunday.”

They added, “I’m three and a half hours into my shift. There’s so many customers and we have four people on the floor all day. Only five people were put on schedule and somebody had to call out.”

The young employee further added that their manager was not very cooperative and took himself off the shift because he didn’t want to work.

“They are literally four people running the store. There’s so many customers and they have scheduled five people. We only have 13 people employed at this store and we don’t have fair scheduling. The managers don’t care about us.”

The barista again stressed the importance of having a union at work and said that their managers need to hold themselves accountable for helping the workers at the company.

“They refuse to turn mobile orders off. We need the liberty to be able to do that because there’s so many mobile orders and I need to get through all of them.”

Speaking of the customer’s rude behavior, the poor barista said they didn’t know what to do, and a customer tried to misgender them and called them incompetent.

“I have a mustache and a beard, what the f***?” they said. “I don’t get accommodations for being neurodivergent, people get mad at me for having too much sick time. I don’t even know what to do anymore, I’m at my wits end with this job.”

Many people in the comment section empathized with the worker and said that being a student with such long working hours is insane. One person even pointed out that the barista had been working 70 hours a week, which is not fair.

“Wow, you are so brave for bullying a young service worker… A full-time college student is expected to do 2-3 hours of homework per every class hour So if this kiddo is in class 15 hours a week, has 30 hours of homework, and then 25 hours of work that is a 70 hour week,” the Twitter user commented while criticizing Gorka.

“This is why everyone hates the older generation because y’all will say you want the best for our generations, and then when we want it to be better y’all whine about how you had it worse and essentially say we deserve the same. I will never understand why you wouldn’t want better,” another said.

Meanwhile, the critics maintained that the barista was a softie who should realize by now that life is hard and people need to work hard and do multiple jobs while being a student to make ends meet.

“Yes, its isn’t worth crying like a baby in the back room over. It isn’t worth a sympathy video begging for attention. And my job is far more difficult. He’s weak because he’s never had to face real problems. Most people deal with more shit daily. He isn’t special, he’s pathetic,” one wrote.

“Do I have any sympathy for this young spoiled kid? No. At 17 I was overseas with an M-16. 12 hour days OR around the clock. Bad food, bad weather, dangerous conditions, etc. some of the best times I can remember & friendships that have lasted a lifetime. Grow up, kid.” Wrote another.

“I don’t feel sorry for you. You chose this job. You can quit at any time if its too much. I understand school and work is a lot, but no one told you you had to work while in school. You could have saved up money while in high school unless you did not work then,” someone else commented.

What are your thoughts on this barista’s story? Let us know in the comment section.